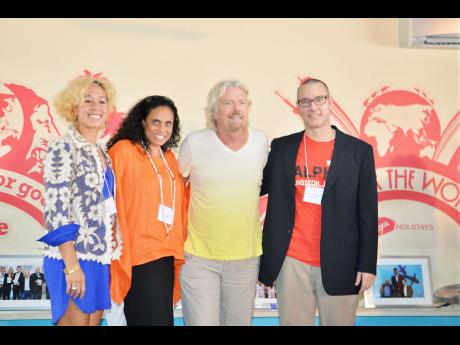 The Branson Centre of Entrepreneurship Caribbean has signed a memorandum of understanding with JN Small Business Loans Limited (JNSBL) which will see three persons obtaining loan funding for their businesses.

Branson Centre has provided the loan funding which will be administered by JNSBL. The bank will waive the fees associated with processing the loans, the Centre said in a media release.

While the agreement was signed in July this year, the funds were released to business operators in November.

The Branson Centre was launched in 2011 to support entrepreneurs at different stages of development. It offers training programmes to develop the ability of entrepreneurs to structure, scale and present their businesses so that they can benefit from investments and partnerships.

Michelle Jones of Vibes Cuisine, Joshua Chamberlain, manager of Special Projects at Alpha Boys School, and Victoria Silvera, owner of Touch By VLS, a ceramics manufacturer, were the first Branson Centre entrepreneurs to receive loan funds for their operations under the facility.

While the partners declined to state the amount disbursed, the arrangement will span two years.

"I am grateful. As a young entrepreneur, I have been able to generate profits and slowly purchase my own kiln, but this sizeable award will allow me to completely expedite my expansion goals," Silvera said, adding that the funds will further her goal to begin exporting her products.

Jones also has export plans that will be fuelled by the low-interest loan. Her company, which has been in operation since 2006, produces a Caribbean culinary travel programme for local television.

For Chamberlain, who was also the winner of the Branson Centre's 'Pitch To Rich' competition can now continue to manufacture the clothing line Alpha WEARJA that was launched in 2013.

Alpha has a screen printing programme, which started about a year-and-a-half ago. It trains students to screen print, as well as make shirts and tote bags.

Under the terms of the agreement, JNSBL and the the Branson Centre will collaborate to appraise each loan applicant to determine if their business is viable, the Centre's statement said.

"The JNSBL has always been committed to helping young entrepreneurs to find their way and realise their dreams," Philip Bernard, general manager of JNSBL said.

Melissa von Frankenberg, partnerships and communications manager at the Branson Centre of Entrepreneurship said the memorandum of understanding is another experimental programme that the Centre hopes to continue.

JNSBL is a wholly owned subsidiary of the Jamaica National Building Society which provides funding to assist entrepreneurs "who have limited access to credit from traditional banking sources to achieve their potential", the JNSBL notes on its website.