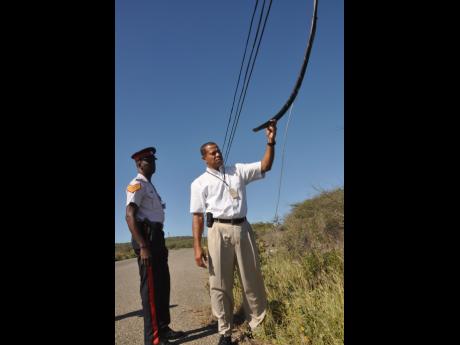 Jamaica's big telecoms companies chalked up losses in excess of $360 million over the last three years from theft or vandalism of cable and equipment, much of which happens in areas that are isolated and hard to police, according to Financial Gleaner estimates.

LIME Jamaica, Flow Jamaica and Digicel Jamaica have all been victims, but Flow appears to be the least affected, based on feedback from the companies.

Columbus Communications Jamaica, which trades as Flow, estimates that losses attributable to cables amount to $29 million annually, but says it is mostly linked to damage of its cables.

"These losses result primarily from vandalism from persons seeking to locate copper. Upon examination of the lines, they soon realise that the Columbus network is different from other operators and is not comprised of copper and they destroy the fibre," the cable company said.

Additionally, Flow estimates that over the last three years the company has lost 50 poles, each at about US$300. That translates to about $1.7 million.

Overall, the triple-play company reported US$250,000 losses per year over the last three years, which translates to a about $85-$90 million.

Digicel opted not to comment in detail for this story, citing the need for discretion in light of ongoing police investigations. But the mobile provider said that "since 2013, there has been a huge upsurge in theft of Radio Base Station (RBS) batteries".

In the absence of an estimate from Digicel, the Financial Gleaner did its own checks which indicated that the lithium deep cycle batteries of the type used by Digicel sell for about US$600-US$850. Based on news reports of thefts and court proceedings, the Financial Gleaner estimates that Digicel's losses could be put at a crude $100 million since 2013.

The total cost to the mobile provider, whatever it is, is not too far from Digicel's mind, despite the reticence.

"There is an extremely high value on these materials and as such, we continue to invest heavily in very sophisticated security systems, at great cost to the business, in an attempt to curtail these incidences," the telecoms said.

LIME Jamaica seems to be the one most affected. The company detailed a relentless onslaught of cable and battery theft, along with vandalism, resulting in losses of $180 million over three years. The biggest hit was from cable theft in 2014, accounting for nearly $79 million. Losses to cable theft for 2013 was half that level at $37 million. Total battery theft set back LIME about $15 million. Over the period, there were 692 incidents of theft and vandalism concentrated in the parishes of St Catherine, St Ann, Clarendon and, more recently, St Mary and Manchester.

LIME says the concentration of theft in rural parishes is undoing its best efforts to deliver the Internet to more people as part of the Government's goal to deepen broadband penetration.