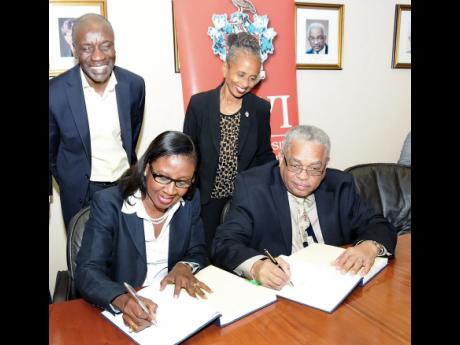 a concession agreement with the University of the West Indies (UWI) to renovate some student residences at a cost of $2 billion.

Parent company 138 Student Living is currently providing 1,584 new student residence units - spanning 11 new high-rise blocks - at the Mona campus in Kingston under an agreement with the university to finance, build and operate through a 30-year concession agreement.

Its new subsidiary will "renovate and reconfigure" the Gerald Lalor post-graduate flats on the campus, which will take the room count from the current 48 to 72, with delivery by December 2015. Irvine Hall will be demolished and reconstructed by delivery date of 2017, in time for that school year. Rooms on the rebuilt hall will be a maximum 600 units.

John Lee, chairman of 138 Student Living, said the new concession agreement is close to the 30-year period of the last agreement. He said the company agreed to pay UWI $200 million for the existing physical plant at the Gerald Lalor flats.

As with the first concession, 138 SL Restoration will finance, build and operate the real estate assets, while earning revenue from student rentals. The rate of return on investment in the new agreement is 12.5 per cent, compared to 15 per cent for the first concession.

Ownership of the assets will revert to the university after an agreed period.

Financing for the SL Restoration project is not yet tied down, Lee said, but he noted that the capital mix would be 80:20 debt to equity.

Local financiers, he said, are currently competing to finance the new project, but 138's board was yet to make a decision on which firm to hire.

Under the first concession, construction is being financed by a joint $1.35 billion loan from Jamaica Mortgage Bank and National Commercial Bank Jamaica, as well the proceeds of a $500 million initial public offering that resulted in 138 Student Living Jamaica being listed on the Jamaica Stock Exchange near the end of 2014.

Lee said 138 Student Living is likely to return to the market with a new issue of shares once the first set of flats are completed later this year.

Student Living will deliver 576 student flats under the first concession agreement by August, at the same that time that phase two construction is expected to begin. The second phase will also deliver 576 rooms by August 2016.

Lee said 138 SL Restoration was created for the second concession, as the first agreement with UWI limited the number of units to be built under the company to 1,600 rooms.

Asked if the company was likely to pursue renovation of the remaining traditional halls of residence, which include Chancellor, Mary Seacole and Taylor halls, Lee said he would wait and see.