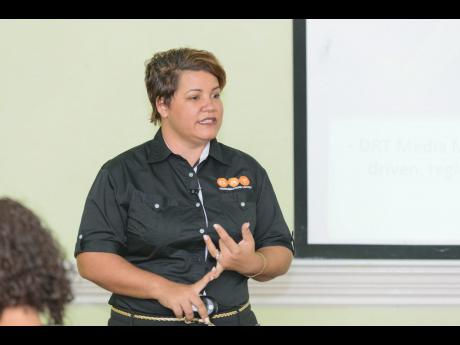 DRT Communications Limited has acquired software that will allow it to track media markets across the Caribbean for any mention of clients or their specials interests, even in places that speak variants of English.

DRT will track social media/Internet, online forums, print and broadcast media and aggregate the information into reports on a daily basis for supply to relevant clients.

The concept is not new, but DRT's CEO, Danielle Terrelonge, says what differentiates her service is the deployment of technology that gives it wider reach into markets that regular aggregators do not have.

"There have been media-monitoring agencies before, but what we're able to do is to track the broadcasts that many of those were monitoring manually," she said.

Terrelonge said she invested US$250,000 to roll out the service, which has been in the making for the past eight months, but refused to divulge much about the tracking software that was customised for Caribbean markets by its developers under licence to her firm, saying DRT has signed a non-disclosure agreement with its technology partners, whom she also declined to name.

Terrelonge says clients in Jamaica, Trinidad and Barbados have already signed up for subscriptions to the service, which costs US$1,600 to US$3,000 per month.

The company has made three new hires internally and is working with outside talent, says the DRT head, but plans to grow the talent pool as demand for the service grows.

Terrelonge says the hardware, including listening posts and servers, has also been customised in a way that gives DRT the capacity to listen to a plethora of radio and television stations broadcasting in different languages and dialects, factoring for subtle regional distinctions.

"We train the language technology to pick up even more than just regular words. We are training it to pick up what we call 'near English' to 'far from English'," she said.

Subscribers to the monitoring service may indicate what keywords they want included in the search, which may include anything, such as company name, a competitor, key personnel, a product, or just key phrases.

The client gets daily reports on the aggregated material, including sentiment analysis, whether positive or negative, as well as trend analysis, which tracks the frequency with which the search item is spotted.

"There are companies who may be looking to exports and they may want to know what the buzz about their product is. We can give geographical trend analyses by country or region so that they know how to make their move," said Terrelonge.