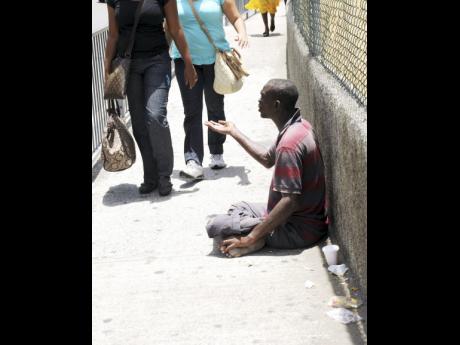 Norman Grindley
A beggar on the streets on Kingston. Nearly one billion people worldwide live on less than US$1.25 per day.

There are many of us who perceive that poverty is one of the main causes behind many of the murders taking place in the country.

It is certainly important on a critical list that includes, anger, immorality, very low value for human life and plain old ignorance.

This week World Bank president Jim Yong Kim addressed the issue of extreme poverty in the world with a measure of good news when he wrote: "Over the past 25 years, we've gone from nearly two billion people living in extreme poverty to fewer than one billion. But that means we still have nearly one billion people living on less than US$1.25 a day."

By that measure, we have many persons in Jamaica who suffer from extreme poverty. Some are windscreen wipers. Others are women and young girls who are forced to use their bodies to sell sexual favours to men in order to survive. More and more of these very poor females are being killed as our bad economic conditions force them into in that most inhumane exchange of momentary relief from poverty for sex. These predators and rapists abuse and use our women and girls, and subject them to extreme prejudice.

The term "extreme prejudice" is well known in the higher echelons of very elite intelligence communities around the world. Essentially, when extreme prejudice is applied to someone - usually a very dangerous enemy - he or she is killed. Pulitzer Prize winning journalist and best-selling author, Seymour Hersh, is one of those who popularised the term in his 1991 book The Sampson Option: Israel's Nuclear Arsenal and American Foreign Policy.

In Jamaica, extreme poverty is fostering extreme prejudice at the hands of criminals and rapists, but also just as sadly, if more silently, from illnesses and insufficient or non-existent healthcare services in shanty towns, shacks and poverty hovels around the country.

Mr Kim of the World Bank states that he and his colleagues "know" that it's possible to end extreme poverty in the next 15 years. He believes that past successes provide a good indicator. I know Mr Kim would know the investment banking phrase - used in prospectuses which offer new, exotic and not-so-exotic financial products - 'past performance is no indicator of future results'. Clearly, Mr Kim's agenda and or optimism have caused him to disregard the investment banking caveat as it relates to relieving extreme poverty.

More solidly, the World Bank president puts growth as the first of three critical strategy approaches and tools which need to be adopted to end extreme poverty. The other two are invest and insure. His remit is the world's economy so Mr. Kim states that the world economy must grow faster and more sustainably. Needless to say, faster and more sustainable economic growth is what Jamaica needs. Many of us out of government have been suggesting that this faster economic growth has to be the national imperative, and some of us have suggested ways to achieve that growth.

Jamaica's growth rate languishes in the one per cent vicinity while the world economy grew by 2.5 per cent in 2014 and the World Bank projects a growth rate of 3.0 per cent in 2015. Jamaica's weak growth rate is one of the main reasons so very few new jobs are being created in the country, and it is a huge risk factor surrounding the successful completion of the four year arrangement with the IMF.

Economic growth is not the panacea for all our social and economic problems, but it is so much better to have sustainable large amounts of it. We need to constantly remind the PM and her minister of finance that economic growth is not the automatic or even natural outturn of an IMF-dictated fiscal consolidation program. Government needs to ramp up its sensible and well thought-out enabling and facilitation efforts to get local and foreign private investors to invest in job-creating and profitable companies.

Crime impedes the flow of investments into the country to create jobs; the absence of jobs encourages crime. Government will need to use innovative policies and fair play to break this vicious cycle. Our young people need worthwhile employment in order to restore some semblance of hope in their despairing hearts and souls.

Jim Kim of the World Bank listed "invest" as the second leg of his three-legged strategy. He was pointed in stating that he means investment in people, especially in education and health care. The unwavering investment in and development of a knowledge economy is a strategy that Jamaica needs to develop.

This knowledge economy approach will make education and broad and in-depth knowledge the assets that our young people will use to develop and enrich themselves and our nation. Making sure that knowledge developed in one part of the economy, public or private, is shared broadly, easily, electronically, speedily and accurately will be a fantastic growth energiser in our economy.

Until we get our economy growing in a manner that is robust - upward of five percent - and one that produces well-paying jobs over a long period of time, poverty is going to reign and grow, and many will continue to feel the deadly squeeze of poverty-induced "extreme prejudice", death.