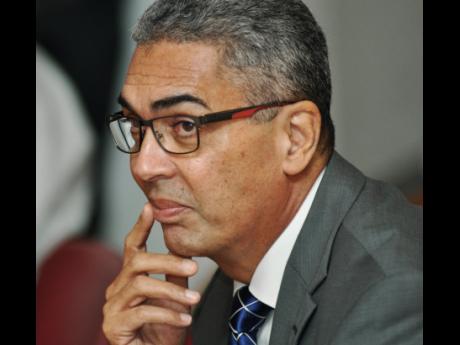 Co-chairman of the Economic Programme Oversight Committee (EPOC) Richard Byles is appealing to the International Monetary Fund (IMF) to grant a waiver to the Jamaican Govern-ment for missing the primary surplus target for the quarter ending March 2015.

An IMF mission is currently in Jamaica conducting the eighth review of the island's economic support programme under the four-year extended fund facility.

It is the first time in the two years of the programme that Jamaican has missed the primary balance target, having recorded $117.2 billion for the fiscal year ended March 2015, falling short of the $121.3 billion by $4.1 billion.

any country - maybe ever, but certainly currently," said Byles, referring the IMF.

"This country has met the targets seven out of the eight quarters that the IMF reviewed us. In one quarter, we fall short by $4.1 billion out of $121 billion, so that's less than four per cent short of the target," he said while addressing a press conference at Sagicor Life Jamaica, New Kingston, where he released the 24th communiquÈ of the non-public sector members of EPOC yesterday.

"They need to make a qualitative judgement, a judgement that goes beyond just the numbers, and that judgement has to be based on the following I think: Were the macro-economic circumstances that were beyond the control of the authorities sufficient to influence the results of the tax target and therefore should Jamaica get a waiver for it. And in particular, I'm thinking about the inflation rate being four per cent instead of 8.3 and growth being about 0.4 per cent instead of 1.7 per cent" for fiscal year 2014-15.

"Second, and just as important, I think they have to evaluate whether the country and the Government remain as committed to the programme and did they display the effort needed to achieve the target," Byles said.

"I think that this is important because it goes to the heart of whether the Government and the country have really put out the best effort. I think that I can say unequivocally from EPOC's point of view that the IMF should give the country a waiver based on these two facts," he added.

cent of budgeted revenue was collected, company taxes and general consumption tax (GCT) on local purchases, which lagged the Budget for the entire fiscal year fell, short by $8.7 billion and $7 billion, respectively.

Byles said that while efforts to secure more tax compliance have not been as successful as expected, some macro-economic issues beyond the control of the Government have also impacted tax performance.

He said lower prices and output would have caused a lower tax intake especially from GCT.

Of significance also, Byles said, was the late implementation of some new taxes, including GCT on government purchases which was not fully implemented until September 2014 and which contributed to about $4 billion in the shortfall in consumption tax intake.

The drawdown of grants was also behind budget by $3.6 billion mostly caused by slower-than-expected execution of projects.

That was achieved because of cuts in expenditure and the better than expected cost of interest on government bonds, said Byles, noting that a lower fiscal deficit helps by slowing down the accumulation of new debt.