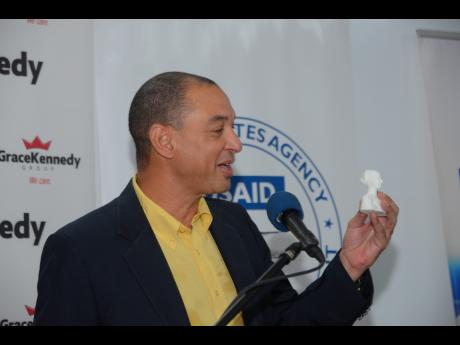 The strategy could grow the commercial bank's locations by 50 within three years, once the Bank of Jamaica approves agency banking regulations.

"If we start rolling out throughout Jamaica - let's say to 50 of them - with the float of Western Union, that is going to be a game changer for First Global," said Don Wehby at the food and financial services conglomerate's annual general meeting in Kingston on Wednesday.

First Global Bank currently has six locations, and plans are under way to expand its Manor Park branch and set up a new branch in Ocho Rios. Western Union has 150 locations and handles approximately half of the US$2 billion in annual remittance inflows into Jamaica.

"The strategy is very clear," said Wehby. "We are leveraging the relationship with GKMS with the launch of agency banking. In two to three years, First Global could be bigger than Scotiabank and National Commercial Bank Jamaica in terms of touch points." GK operates Western Union through GraceKennedy Money Services (GKMS).

First Global is currently the fifth-largest bank of six in terms of customer deposits - around $21 billion at the end of 2014 - and it has a capital base of $6.9 billion. GraceKennedy recently injected an additional $850 million to shore up the commercial bank's equity.

The GraceKennedy group CEO is hoping for agency banking regulations to be approved by yearend. The central bank has been working on it since 2013.

In the meantime, the conglomerate is testing its mobile wallet services. The pilot was already approved by the central bank and Wehby is seeking to fully launch the service by July.

"We are using internal staff to use the mobile wallet," said Wehby. "By the end of this year, you are going to be able to put money on your phone; go to Western Union and get your cash and pay with it; and be able to go to Hi-Lo and use your phone to pay your bill."

The Hi-Lo supermarket chain is also undergoing an expansion. The conglomerate spent $200 million upgrading the retailer's Manor Park and Barbican locations, fitting them with more modern, efficient refrigerators, redesigning the layout, among other upgrades, which is expected to provide substantial savings.

"Revenue is already up by 20 per cent and with that margin we expect a payback in five years," Wehby told the Financial Gleaner.

Overall, the supermarket expansion plan is expected to cost US$8 million ($900 million). Rationalisation of some stores is under way - Hi-Lo's Ocho Rios and Mandeville branches were closed - but GraceKennedy is seeking a new location for the most prominent town in the parish of Manchester.

Still, the La Fe acquisition in the United States is expected to be the real game changer for GK Foods. It presents the opportunity to boost revenue by US$50 million - on top of the US$80 million revenue generated by the US-based frozen food supplier last year - in its first full year. Wehby said that it is also on target to make a profit in year one.

Importantly, GraceKennedy wants to push the brand to be a clear leader in the Hispanic market - that is, to be comfortably considered as number two to Goya, the market leader in the United States. Presently, La Fe is grouped with Iberia, Tropical and Conchita in terms of being the second most recognised Hispanic brand in the US, ahead of the likes of Jumex and La Costena.

La Fe's distribution network is expected to play a major role in GraceKennedy achieving this goal, given that the conglomerate previously outsourced its US distribution. The latest acquisition also gives the Jamaican company the capacity to expand its product range where it previously failed - such as its microwaveable, frozen curried goat and stewed peas, which didn't take hold in the North American market some six years ago.

Now, a Grace-branded Jamaican patty is on the drawing board, and it may hit the market before yearend.

As for the agency banking project, mostly, the Western Union locations will require little upgrade - just the addition of a special banking window and reconfiguration of the store floor to accommodate the different types of transactions. It's too early to say how much the upgrades will cost, but Wehby said that it would not be substantial, that is, less than $5 million across the branches, conservatively speaking.