Greece restarts talks with creditors as country on edge 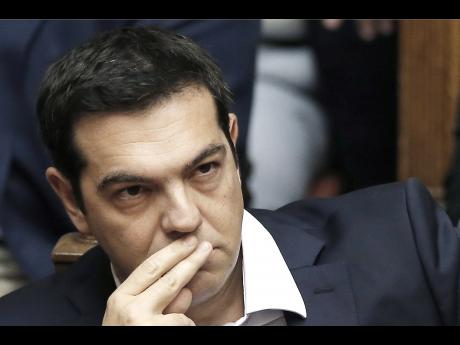 With their country struggling to stave off financial collapse, Greek officials restarted talks with sceptical creditors on a new rescue deal, but showed up Tuesday without the concrete proposals their European counterparts had demanded.

Prime Minister Alexis Tsipras' situation is urgent: Without a deal, Greece's banks could go bust within days, the first step in the country's potential exit from the euro currency union. Its banks won't reopen until Thursday at the earliest after the European Central Bank refused to increase assistance.

Eurozone finance ministers, including Greece's newcomer Euclid Tsakalotos, met in Brussels ahead of a full summit of leaders later Tuesday.

The meetings were unlikely to be decisive, though, after officials said Tsakalotos had not brought written proposals with him. Rather, they said, he made a presentation and discussed key issues.

The three officials spoke only on condition of anonymity because they were not authorised to speak publicly.

One big sticking point in the talks is Greece's demand that the terms of its bailout loans be made easier.

European officials are split on the issue, with lead Eurozone lender Germany still reluctant. The International Monetary Fund last week called for European states to accept longer repayment rates and lower interest rates on their loans to Greece. Many economists say that Greece's debt burden, at almost 180 per cent of annual gross domestic product, is unsustainable for a country its size.

Getting a new rescue deal for Greece is urgent and becoming more so by the day. Greek banks are running out of cash even after the government shut them last week and placed limits on how much depositors can withdraw or transfer.

Normal commerce is now impossible in Greece. Small businesses, lacking use of credit cards or money from bank accounts, were left to rely on cash coming from diminishing purchases from customers. But Greeks are holding on tight to what they have. And suppliers are demanding that businesses pay cash up front.

Giorgos Kafkaris, a 77-year-old pensioner, was among Greeks standing in line to withdraw cash at an Athens ATM on Tuesday.

"I came to get the €120, I can't take more. The good thing is we had sorted things out earlier and we had €200-€300 set aside," he said. "I'm waiting for something better for all of us. I believe something better will happen."

Tsipras made a big win in Sunday's bailout referendum when 61 per cent of Greek voters rejected measures creditors had proposed last week in exchange for loans.

In a sign he may be willing to compromise, Tsipras appointed a new finance minister to lead talks with creditors.

Tsakalotos, a 55-year-old economist, has replaced Yanis Varoufakis, who constantly clashed with his peers.

"I won't hide from you that I am very nervous and very anxious," Tsakalotos said after being sworn in Monday. "I am not taking over at the easiest moment in Greek history."