June primary surplus target steep, but will be met - Byles 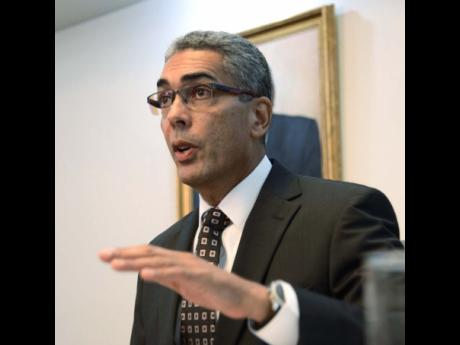 The primary surplus target under Jamaica's economic support programme with the International Monetary Fund (IMF) increases significantly to $17 billion for June 2015, but the Economic Programme Oversight Committee (EPOC) is confident that it will be met.

The primary surplus, measured against the Government's budget for April and May 2015 - the first two months of fiscal year 2015-16 - stood at $2.8 billion compared with a deficit of $1.6 billion.

This means that the Government would have had to collect an additional $14.28 billion in taxes in June to meet the target.

However, co-chairman of EPOC, Richard Byles, said the Ministry of Finance and Planning, based on preliminary figures it has seen, was on track to meet the IMF target for the first quarter of the fiscal year.

At the same time, addressing a press briefing at Sagicor Life Jamaica in New Kingston, where he issued the 26th communiquÈ of the non-private sector members of EPOC on Monday, Byles said the committee was concerned that a settlement of the current public-sector wage negotiations above the Government's budget could force the country to breach the key targets under the IMF programme.

He referred specifically to the primary surplus target of 7.5 per cent of gross domestic product (GDP) under the four-year programme, and the wage-to-GDP ratio which is programmed to be reduced to nine per cent by fiscal year 2016-17.

Public-sector workers have expressed dissatisfaction with the five per cent and a subsequently revised seven per cent increase the Government has offered on wages for the two fiscal years ending March 2017.

"EPOC is generally positive in its outlook on the Government's implementation of the programme," said Byles.

"However, we see the wage negotiations as a potential risk to two very important quantitative targets - the primary surplus and the wage-to-GDP," he said.

"We really are anxious to see this negotiation settled, and settled in a manner that doesn't do harm to, or put at risk, the quantitative targets," he added.

Said Byles: "I certainly understand and appreciate the position of the public-sector workers. But we have to take into account the whole population of Jamaica, meaning the country's performance under the IMF programme."

The co-chairman said EPOC members said they "recognise the sacrifice public-sector workers have made, to date. However, the fragile nature of the country's finances requires a solution that keeps the programme intact. The consequences of a programme failure would negatively impact every Jamaican, including public-sector workers."

Reporting on other selected fiscal and monetary indicators, Byles said that the net international reserves at the end of June stood at US$2.12 billion against an IMF target of US$1.34 billion, despite the Government paying out loans of more than $300 million during the review period.

Tax revenues of $58.7 billion for the two months were ahead of budget by 2.1 per cent.

All three categories of tax - income and profits, up 0.4 per cent; production and consumption, up 7.5 per cent; and international trade, up 5.3 per cent, exceeded targets for the period.

Customs and stamp duties also underperformed by about $344 million, and company tax and dividend tax were $258 million behind.

Compared with the same period last year, tax revenue was $8.4 billion or 16.7 per cent higher, with local GCT of $5.9 billion and SCT on imports of $2.8 billion accounting for the increase.

Expenditure was $3.8 billion or 4.9 per cent lower than budgeted. Capital expenditure of $8 billion was 20.6 per cent short of target, but far more than last year's $4.6 billion.

Byles also said that Minister of Finance Dr Peter Phillips, Financial Secretary Devon Rowe, and Bank of Jamaica Governor Brian Wynter, have just completed a 'non-deal' roadshow in the United States and Europe and the presentation on the Jamaican economy was well received by the investor community.

The 'non-deal' roadshow meant that they did not go specifically to canvass for loans, but Byles said if the reception was good they could have accepted loans.