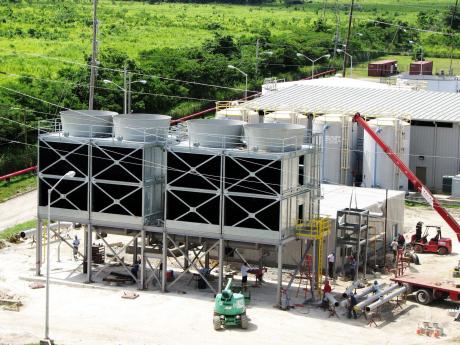 Chief executive officer and president of the Jamaica Public Service Company (JPS), Kelly Tomblin, says that while it is expected that the use of natural gas will result in costs of US$0.13 per kilowatt-hour for electricity, other costs will have to be added in the process of delivering energy to consumers.

She said the main impact of the use of liquefied natural gas (LNG), for which the company has contracted United States-based supplier Fortress Energy, will be a reduction in price volatility.

The JPS plant at Bogue in Montego Bay, St James, which currently burns automotive diesel oil, is slated for conversion to the use of both gas and oil by 2018.

Noting that the actual supply, price of LNG from Fortress - the contracted supplier - is subject to confidentiality, Tomblin told Wednesday Business in an interview that "this was a competitive process and we expect gas to be competitive, very competitive".

"What we can say today is that ADO (automotive diesel oil) is about $80 per barrel, and so we are not going to see as much of an impact from gas as we did last year when ADO was running at US$110-US$120."

She indicated that the contract with Fortress is for 10 years, compared to other supply contracts which usually last for 20 years. This, she said, was based on evolving technology which might lead to total plant replacement in a decade.

JPS is also planning the closure of its Old Harbour, St Catherine, and Hunts Bay, St Andrew plants which generates 292 megawatts of electricity with the use of heavy fuel oil and will be replaced with a 190-megawatt gas-fired cogeneration power plant at Old Harbour by 2018.

No dramatic reductions in price will be seen immediately, Tomblin said. However, she noted that LNG will bring price stability compared to oil.

She said there were other costs to be added to bring power to the grid, which will be added to the US$0.13 cost base.

"There are other things to be added and we also have to pay for the grid," Tomblin said.

She said the upgrades will be done "unit by unit " and as each is done it will result in "downward pressure on price. The goal is to lower energy bills, but embedded in that goal is to have fuel diversity. What we have suffered from isn't just high prices, it's the volatility and reliance on one fuel," the JPS CEO said.

Tomblin said that reducing costs at Bogue will also enable the utility provider to avoid the generation imbalances caused by private homeowners who, during the day, use solar but at nights increase demand from the grid.

"We have to have (capacity at) Bogue to effectively manage intermittent resources that go on and off the grid. We (will now) have generation which can handle that," she said.