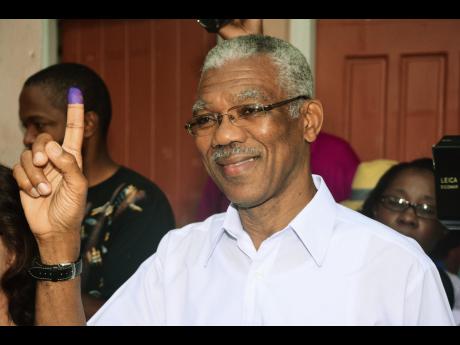 The Guyana government yesterday said there is documentary evidence that Venezuela had communicated to the previous administration its decision to end an oil for rice deal long before the May 11 general elections.

He said even the former ambassador to Venezuela knew of the Caracas decision.

"It is sad and inexcusable that the Guyanese people were not advised of this by the former PPP government. Questions will now have to be asked as to whether the Guyanese people, and the thousands of rice farmers in particular who could be affected, were being held hostage by the PPP's silence purely for the purposes of narrow politicking," Nagamootoo said in a statement on his Facebook page.

Venezuela, which is involved in a border dispute with Guyana, uses the PetroCaribe initiative started under the late president Hugo Chavez to supply oil at concessionary rates to Caribbean countries.

It is also used to promote trade among member states and Guyana has been supplying rice to Venezuela under the initiative.

Under the current trade agreement, Guyana is expected to supply approximately 210,000 tonnes of paddy and polished rice annually to Venezuela. The value of this supply amounts to US$130 million.

The new David Granger administration said it only knew of the deal coming to an end last week when Finance Minister Winston Jordan and a team headed to Caracas to renegotiate the accord.

"The revelation comes on the heels of Venezuela's actions to challenge what is lawfully Guyana's territory and it will have to be considered whether Venezuela's position of the non-renewal of the PetroCaribe barter agreement is indeed an act of economic sanction against Guyana," Nagamootoo said.

Earlier this year, then Agriculture Minister Leslie Ramsammy, on a return from a visit to Venezuela said he had secured a new deal, but it was never communicated that the new agreement was not a long-term one.

Nagamooto said the government will explore fully all options to ensure that farmers and those dependent on Guyana's rice industry are not adversely affected.

Rice farmers have upgraded their equipment in a bid to take full advantage of the rice deal.

Soon after it lost the general election, the PPP/C denied a Guyana government statement that the PetroCaribe Fund, which was set up as part of country's oil arrangement with Venezuela, is empty.

"Absolutely no money whatsoever is missing from the PetroCaribe Fund, and even if the Fund has limited balances in it that does not mean in any way that any money is missing from it," the party said.