Merkel arrives in Bosnia to back economic reform 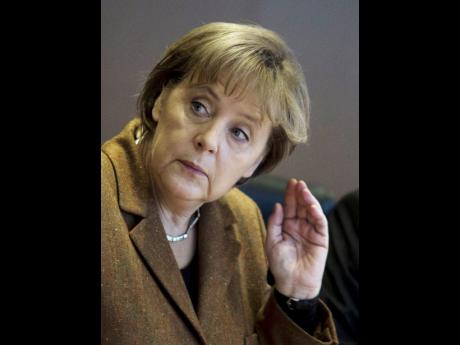 German Chancellor Angela Merkel said yesterday the western Balkans can only prosper if Bosnia develops well and that despite its problems she believes in the future of this country as a European Union member.

Merkel met with Bosnian leaders in Sarajevo at the last stop of her Balkan tour that also included Albania and Serbia. All three countries are aspiring for European Union membership.

Merkel urged Bosnians to launch social and economic reforms that would create jobs and speed up the EU membership process. Although the country's Muslim Bosnian, Serb and Croat leaders signed a joint declaration in January expressing readiness to implement all EU reforms proposed by Germany and Britain, the Bosnian Serbs revoked their commitment in June.

Still its leaders are optimistic. The chairman of Bosnia's three-member presidency, Mladen Ivanic, said his country "is not ideal" but it can offer opportunities to people who are looking into the future and pledged for support from Europe.

Bosnia's unemployment rate is over 40 per cent and the country is one of the poorest in Europe. It is also lagging behind its neighbours on the path towards EU membership, but Ivanic said he believes it will catch up and obtain candidate status by the end of 2017.

"We stand by the European perspective of all countries in the region and we know that the problems which have to be solved here in Bosnia-Herzegovina are very complicated, but that the entire region can only prosper if Bosnia-Herzegovina develops well," Merkel said.

Her visit comes at a time when the country is marking the 20th anniversary of the Srebrenica massacre - the worst crime in Europe after the Nazi era. Bosnian Serbs killed some 8,000 Muslim men and boys after they overran the eastern Bosnian town in July 1995.

"We will all need courage - and this counts for all the responsible here who are forming the future - to make sure that such horrible events never happen again," Merkel said.

Merkel is Time's Person of the Year