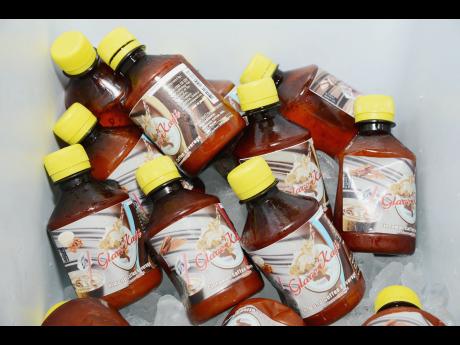 Three fledgling entrepreneurs are hoping to cash in on a novel way to enjoy a traditionally hot beverage - coffee.

They have created a flavoured cold-coffee drink called Glace Kafé , which has already found favour with university students as a refreshing way to stay awake for longer while they study.

Glace Kafé  comes in three flavours - cinnamon, original and almond - and was created by the University of the West Indies (UWI) students who were scouting for business ideas that apply scientific training to life and business.

"We wanted to differentiate ourselves from the conventional way of drinking coffee, which is hot and plain," one of them, Jordan Freeman, told the Financial Gleaner.

Glace Kafé  is the first product to hit the market for Freeman and his partners Samantha Williams and Okema Brown, who together formed their company, Sweelevia Company Limited, in January this year.

The company buys Jamaican coffee for the finished product, Freeman said, though he declined to state from which region it is acquired.

The 8.5-ounce product is targeted at both coffee lovers and non-coffee drinkers "who want a difference," he said, adding that other flavours are in the pipeline.

"We are not appealing to just the regular coffee drinker who drinks hot coffee; we are creating an experience," he added.

The drink is "not just a normal way of making hot coffee cold, (but) a lot of methodology and procedure has gone into making this cold coffee really smooth on the palate. It's not the same as just freezing your coffee," the young manufacturer said.

Though he got the formula from a friend, Freeman said he has since tweaked it to achieve the product that is now produced at the Mona Technology Park.

The company started manufacturing out of the business incubator hub with the help of the Jamaica Business Development Centre in April, following approvals from the Bureau of Standards Jamaica.

The aim is to get to 5,000 bottles within six to eight months, he said, adding that the drink has so far been a hit with university students as well as call centre employees and corporate offices.

The team pumped over $500,000 into start-up costs and business advice, "among other things," Freeman said.

To push marketing, they have gone into corporate offices and have offered sampling and six-pack deals on the UWI campus.

Glaze Kafé  should also be available in at least one noted supermarket chain in the coming weeks, Freeman said, noting that discussions are now under way.

"We did some sampling at UWI and other places. People said it gives the ability to stay up to continue studying (and) works as an energy drink," Freeman said.

Of market take-up, Sweelevia hopes to have at least 10 to 20 per cent foothold locally within a year and a half.

The fledgling company also hopes to have another product on the shelves by October.

"What we are doing is creating a tea with a natural sweetner," Freeman said, noting that the tea product will be branded Sweelevia.

The young entrepreneurs are, however, partnering with a more established company to manufacture the tea product because "it takes a lot of capital".

Though they are still yet to make in-roads in the market, Sweelevia is keen on exporting as well as distributing to other parishes.

"We are still just in Kingston and St Andrew, but we are looking to go to Montego Bay and other tourist areas," he said, adding that the US market would also be targeted for exports.

"We would like to increase our returns to the million-dollar mark soon," he said.