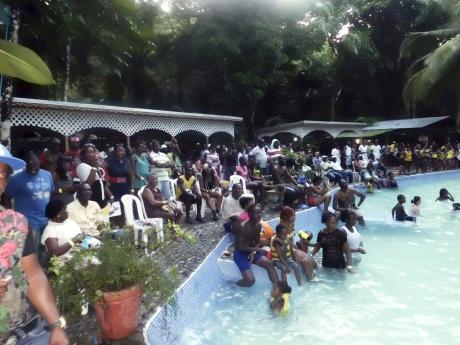 Patrons at a concert at the Somerset Falls in Portland.

Andrew Azar, managing director of LP Azar, has placed the 112-acre Somerset Falls property in Portland on the market.

The businessman runs LP Azar, a fabric company which has been diversifying through acquisitions.

Its purchases in recent years have included a complementary fabric house, Pablo's; the Somerset Falls, and the real-estate company CD Alexander. It also began operating a Tutti Frutti yogurt franchise in 2013.

Azar has advertised Somerset Falls for sale, citing it as " the most beautiful waterfall property". It is located on the main road between Buff Bay and the Portland capital, Port Antonio.

The Somerset Falls property, said to be a a former indigo and spice plantation, features the picturesque waterfall from which it gets its name, crotons, bamboo, ferns, cocoa plants, indigo and moss-covered trees in gardens on the banks of the Daniel River.

A play park constructed by its owners include boat rides and a fish pond, among other attractions.

Previous upgrades announced included the construction of a natural juice bar as well as a food centre where patrons can buy Portland produce.

The grounds of the falls incorporate a restaurant, bar, changing space, aviaries and tropical gardens. The main attraction includes limestone caverns and the falls.