Epson goes all out to capture market share in Jamaica 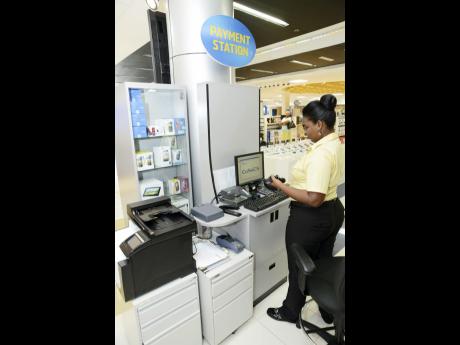 File
One of two payment stations at Courts Constant Spring Road that allows for quick purchase of small items in the store. Epson is partnering with Courts and other companies to market its new printers in Jamaica.

They have come with the muscle and they have mapped out the strategy. Epson knows Jamaica is HP country when it comes to printers and they are aiming to change that. The Talk of The Town restaurant at The Jamaica Pegasus hotel in New Kingston was the first stop in the English-speaking Caribbean sweep that will also take in Trinidad and Tobago and Barbados.

Abelicio Quintero, general manager for the Caribbean, operating from Miami, Florida, says Epson is going all out to garner market share in Jamaica and the rest of the Caribbean.

He told Sunday Business that over the next three months his company will be spending nearly $12 million on promotions and advertising to capture a wave that was started in the Dominican Republic, which saw Epson replacing HP as the printer of choice among consumers. He says initial reaction has been solid with the Jamaican market being receptive to the new product.

"The people are very excited with this product. I think the potential here in Jamaica is good. Jamaica is a very strong economy for us. They already have our video projectors and some of our printers and I think that there is a great opportunity for us at Epson and the people of Jamaica," Quintero said.

At the heart of the Epson effort is a range of printers that are aiming to revolutionise how printing is done whether at home or office. The printers use fine inkjet technology that dispenses with the need for ink cartridges which have proven to be the bane of printer owners. The printers use an ink tank called "EcoTank". The printer comes supplied with 4-6 bottles of ink - depending on the model and purpose - which are used to load the ink tanks thus dispensing with the need for cartridges. Epson claims that their system eliminates the need to buy as much as 35 cartridges that are normally used in the typical HP printer.

The Epson printers cost more upfront. The typical HP printer starts at about $7,000. Epson printers are likely to come in starting at about $20,000. Quintero is asking consumers to look beyond this as it will cost far less in the long run.

"We need people to look at the cost of the printer in the long run. When you buy a cheaper printer, you get a small cartridge that you will soon have to replace. With the Epson, you don't have to buy ink for a very long time," Quintero said.

TEAMING UP WITH COURTS

Epson has joined forces with furniture giant Courts along with technology outfit Intcomex and Royale Computers to launch their assault on the Jamaican market. Intcomex will act as lead sellers and provide technical support including the backing of warranties. Quintero says Epson is holding nothing back in the bid for market share. This includes making sure that the Jamaican market is ahead of the rest in terms of having the latest printers on offer from Epson.

"In Jamaica we are launching the next generation of Epson printers. This means that Jamaica will be ahead of other countries in Latin America and the Caribbean in terms of having state of the art printers," Quintero said.

The Epson printers are already in the Jamaican market. The local agents say they will be targeting businesses and institutions such as schools along with households to drive sales.