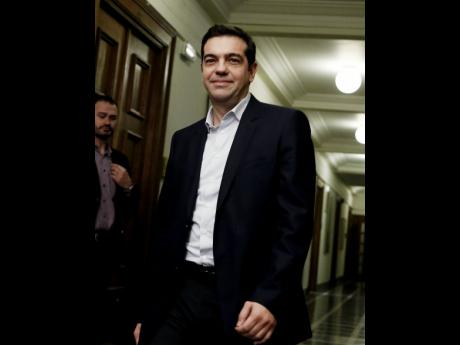 The proposed measures, including tax hikes and cuts in pension spending, are certain to inflict more pain on a Greek public who just days ago voted overwhelmingly against a similar plan.

But the new proposal, if approved by Greece's international creditors, will provide longer-term financial support for a nation that has endured six years of recession.

The government was asking for lawmakers' endorsement to use the proposed measures as a basis for negotiation.

If approved, Greece would in turn get a three-year loan package worth nearly $60 billion (53.5 billion euros) as well as some form of debt relief far more than the 7.2 billion euros creditors had been offering during the previous five months of fruitless negotiations.

Greece's latest proposal was sent to rescue creditors who were to meet this weekend to decide whether to approve it. The country has relied on bailout funds since losing access to financing from bond markets in 2010.

In an unusual move, Prime Minister Alexis Tsipras called Friday's emergency parliament session to try win the backing of reluctant members of his left-wing Syriza party essentially asking them to sign off on measures that seem like a U-turn after more than 60 per cent of voters opposed more austerity in last Sunday's referendum.

The coalition government has 162 seats in the 300-member parliament and pledged backing from a large section of opposition lawmakers. But a significant loss of votes from his own government could topple Tsipras' coalition.

Greece's major creditors the International Monetary Fund, the European Central Bank and other eurozone nations were already fine-combing through the proposals before sending them to the other 18 eurozone finance ministers. A summit of the full 28-nation European Union in Brussels is to consider them today (Sunday), with hopes for a deal before midnight.

French President Francois Hollande gave the measures a swift thumbs-up, calling them "serious and credible," though Germany refused to be drawn on their merits. France's Socialist government has been among Greece's few allies in the eurozone during the past months of tough negotiations, with Germany taking a far harder line.

Jeroen Dijsselbloem, the Dutch finance minister who chairs the meetings of the eurozone finance ministers known as the eurogroup, said the proposals were "extensive" but would not say whether he considered them sufficient.

As the government inched closer to a deal to ensure Greece isn't jettisoned out of Europe's joint currency, some Greeks were furious at the proposed measures.

"If this is Europe, then we don't want this Europe," said Aristidis Dimoupulos, a marketing professor in Athens. "If this is the eurozone, we don't care if we go out or in. If in this life we'll be slaves, it's better to be dead."

Others adopted a wait-and-see approach.

"I don't know. The chances are 50-50" for a deal, said Athens resident Omiros Fotiadis.

Meanwhile, banks remained closed since the start of last week and cash withdrawals were restricted to 60 euros ($67) per day. Although credit and debit cards work within the country, many businesses refuse to accept them, insisting on cash-only payments. All money transfers abroad, including bill payments, were banned without special permission.

Alternate Finance Minister Dimitris Mardas said the banks would be gradually restored to operation. They are set to remain closed through at least Monday, at which time he said a new order would be issued expanding what transactions can be carried out.

Experts said it was unlikely, even in the event of a deal, that limits on cash withdrawals and transfers would be lifted completely for some time.

The main governing party, Syriza, a fractious coalition of left-wing groups, had resisted a new loans-for-austerity deal, arguing the country is too weak to endure it with a quarter of the labor force out of work and a growing number living in poverty.

But it was forced to resume talks with creditors as Greek banks faced the prospect of collapse within days if the country did not receive a new rescue package.

In return, the government said it would seek debt relief likely in the form of lengthened repayment periods and lowered interest rates a notion that was gaining ground internationally despite reluctance in Germany.

"The realistic proposal from Greece will have to be matched by an equally realistic proposal on debt sustainability from the creditors. Only then will we have a win-win situation," European Council President Donald Tusk said after the Greeks submitted their proposals Thursday.

But in a note of caution, he added: "The room for maneuver through debt re-profiling or restructuring is very small."