No plans to enter telecoms market yet - Jamaica Public Service 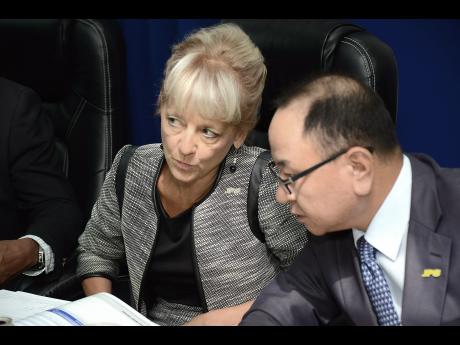 The Jamaica Public Service (JPS) said it has been granted telecommunications licences and has the requisite infrastructure to venture into the sector if it so desires, but has no concrete plans to enter the market at this time.

According to President and Chief Executive Officer Kelly Tomblin, "Embedded in those assets is a lot of communication assets that we know that the world is using to do a number of different things. A lot of what we see strategically is the idea of multi-communication (and) multi-directional power flows."

Tomblin was highlighting the latent value of the power company's massive distribution network while speaking in an interview with Sunday Business following the company's annual general meeting at its New Kingston offices on Friday.

Callum also confirmed that the JPS presently uses its telecoms assets in a limited way for internal communication that can operate independent of other telecoms providers, especially if Digicel and LIME's systems are down. She reiterated that while there are no concrete plans to go into this area at this time, the existing infrastructure can support them going into the field if they so desire.

Tomblin emphasised that leveraging telecoms will be a definite part of JPS's future. She said this will give both the company and the consumer a greater range of options that will ensure better service delivery and greater satisfaction.

"[The] ability to communicate is going to change everything, [that is\ the ability for you to know what you're using, the ability for me (JPS) to send you a price signal, for me to have a number of different apps that lets you monitor energy usage," she said.

The light and power company's new strategic outlook comes as they posted an improved financial performance for 2014. JPS more than doubled its 2013 profits, earning US$23 million in 2014 as against US$9 million the previous year. The company says it used US$10 million less than budgeted for its operating and maintenance expenditure. At the same time, JPS is reporting a one per cent decline in sales, along with a one per cent increase in system losses, mostly from electricity theft, which drained US$18.4 million in revenue from the company.

Tomblin is clear that since the JPS has spent the last two years getting a lot of things right, it is now time to strategise for the future.

"We've got a lot of the basic energy stuff in play or fixed and now it comes to us (wanting to) look at things strategically: Where do we do solar? How do we do energy solutions? How do we do the main response (and) how does the communications asset that we have fit into our future?" she said.