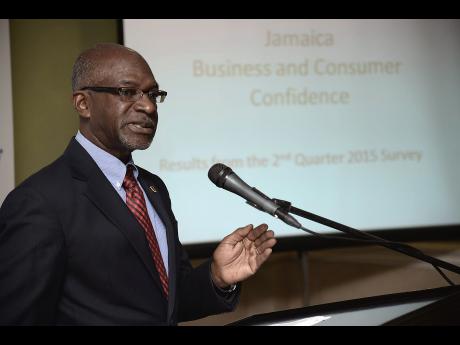 In a ringing endorsement of government policies, businesses and consumers remained optimistic about their finances

and the economy in the latest confidence surveys.

Following a surge in both indices during the first three months of 2015, consumer confidence remained largely unchanged in the second quarter of the year, while business

"For the last nine months, the average (business) confidence level has been better than any other time during the last 10 years," said Don Anderson, who led the latest survey of confidence indices conducted on behalf of the Jamaica Chamber of Commerce Conference Board.

Consumers were still quite dissatisfied with the current economic situation. Eighty-six per cent still see jobs as being scarce, personal incomes are expected to remain the same, and purchase plans were largely unchanged.

"Low inflation as well as the relatively better economic performance of Jamaica's main trading partners will help to ease the adjustments in the domestic economy," said Anderson. "Jamaican consumers seem to have recognised that the long-term benefits outweigh the harsh but more temporary costs of

Although, optimism among Jamaican firms eased following the surge recorded in the first quarter of 2015, it still remained at the third highest level ever recorded.

business confidence," said the renowned pollster at a press briefing held in New Kingston on Tuesday. "The stabilisation of confidence at these very favourable levels was equally driven by firms' assessment of current and future economic conditions."

Firms have expressed more optimism during the past nine months than during any comparable time period in the past decade.

Also, 68 per cent of firms reported that profits were higher or the same as they previously anticipated, while 62 per cent believe that their profits will improve over the next 12 months.

Consequently, investment plans remained at record high levels - 62 per cent reported that it was a good time to expand their productive capacity to more fully take advantage of future economy opportunities. This was only slightly below the all-time record of 65 per cent set in the last quarter of 2014.