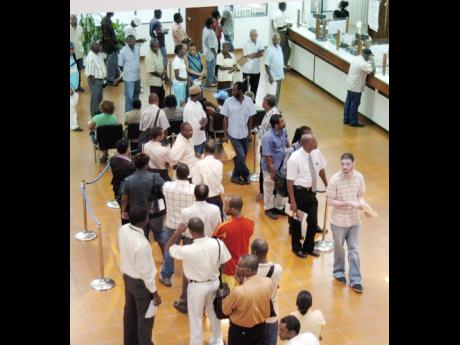 File
Persons waiting to pay taxes at a collectorate in Kingston.

The government will start sensitisation and education activities for taxpayers and their accountants impacted by the new transfer pricing legislation by July 31, according to a progress report it submitted to the International Monetary Fund (IMF).

The legislation pertaining to transfer pricing was tabled in Parliament on May 5, 2015 and was expected to be passed in June 2015, said the latest memorandum of economic and financial policies presented to the IMF under Jamaica's four year economic support programme.

However, a spokesperson at Parliament said yesterday that the bill, entitled An Act to further amend the Income Tax Act, has not yet been debated.

The report to the IMF said that with technical assistance from the Organisation for Economic Cooperation and Development (OECD), Tax Administration Jamaica (TAJ) is developing its capacity to effectively administer the new law upon its adoption.

Next steps to strengthen tax and customs administration include the start of formal training of TAJ staff - auditors, lawyers, technical specialists and data analysts - on transfer pricing issues, including asset base erosion and profit shifting, as soon as legislation is passed, based on the finalised rules by the OECD base erosion and profit shifting (BEPS) project.

BEPS refers to the negative effect of multinational companies' tax avoidance strategies on national tax bases. Researchers point out that base erosion and profit shifting can be achieved through the use of transfer pricing or what some refers to as transfer mispricing.

The BEPS project is headed by the OECD and is said to be an "attempt by the world's major economies to try to rewrite the rules on corporate taxation to address the widespread perception that the (corporations) don't pay their fair share of taxes," said Kash Mansori, an economist who has been working on transfer pricing issues for more than 15 years.

The next steps also include Jamaica's application of the new transfer pricing law to returns for year of assessment 2015 by including in the large taxpayer office audit plan for fiscal year 2016/17 transfer pricing specific issue audits.

The transfer price is what one unit of a business charges another unit of the same business for a good or service.

According to Paul Hoberg, certified public accountant and leader for Transfer Pricing in the Moss Adams International Services Group, transfer pricing is "the systems of laws and practices used by tax jurisdictions to ensure that transactions between related companies are appropriately priced, based on market conditions, such that profits are correctly reflected in each entity and not artificially inflated in entities subject to low or no tax and artificially depressed in entities subject to high tax".

In a May 2015 report following the tabling of the bill, the accounting firm KPMG in Jamaica noted that the assumption is that the parties, because they are connected, can influence the pricing of goods and services beyond what is normally available in the marketplace, sometimes in a manner that is designed to reduce their tax liabilities.

In addition, the legislation will affect transactions between Jamaican companies that are connected and are therefore not limited to cross-border transactions, although it is expected that enforcement will be focused on such transactions primarily.

The transfer pricing legislation will also take into account the use of captive insurance companies, that is, insurance companies established by a parent group or groups with the specific objective of covering the risks to which the parent is exposed. Therefore it is a type of self-insurance, which also sometimes insure risks of the group's customers.

The legislation will also cover transfers and pricing of intangibles, the report said.

Jamaica's transfer pricing legislation provides for the Commissioner General of TAJ to make rules regarding transfer pricing agreements, including rules in respect of the criteria for a person to be eligible to apply for such an agreement.

It will also empower the Commissioner to make rules regarding the information to be provided by an applicant, and the terms and conditions that are to be included in such agreements, including provisions for their duration, suspension and termination.

According to KPMG, for those multinational companies that are not engaged in aggressive transfer price tax planning, the legislation provides an opportunity for them to approach TAJ and to enter into an agreement.

"There will be considerable discussion (and plenty of complaints) in the early days about how this process is tedious, cumbersome and labour-intensive for the taxpayers and how it benefits TAJ only (since any agreement will be premised upon full disclosure to TAJ)," it said.

KPMG said however, that "experience in many of the countries that have adopted similar transfer pricing rules shows that this is the preferred approach of many of the larger companies and of the tax administration".