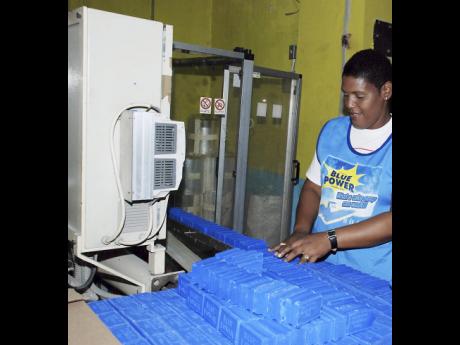 Colin Hamilton
A worker on the assembly line at the Blue Power soap plant on Victoria Avenue in Kingston. Mayberry has taken a larger stake in the soap maker.

Mayberry Investments bought another three per cent stake in Blue Power Group (BPOW) on Wednesday to bring its total shareholdings in the soap maker just past the 20 per cent mark.

This makes BPOW an associate company of the investment house, which notified the Jamaica Stock Exchange (JSE) that it has no intention of increasing its ownership at this time.

However, the additional shares means that Mayberry will start seeing Blue Power's profit contribute to its earnings.

The brokerage and investment management firm is known for taking equity positions in other listed companies and historically has made a substantial portion of its profits from associated companies. For example, Access Financial Services contributed to more than a quarter of Mayberry's earnings over the five years to December 2014, when the investment house offloaded its 39 per cent stake in the micro lender.

Mayberry managed to increase its bottom line in its first quarter of this year without that share of profit, and has since taken on another associate company in Lasco Financial Services. In May, it increased its shareholdings in the cambio and remittance service company from less than one per cent to 20 per cent.

The stake in Lasco Financial would have given Mayberry just $2 million during the first three months of 2015, while 20 per cent of Blue Power's earnings would have contributed less than $2 million.

Although the recent additions represent a far cry from the $31 million the company earned from its shares in Access in the first three months of 2014, both are seen as strategic acquisitions focused on future earnings of the associated companies.

"We think that BPOW has a lot of potential for growth and we believe that we have value to add to the company as well," said Mayberry CEO Gary Peart. "The potential for improved product sales and increased market share is vast, particularly for its soap division."

Indeed, the soap division managed to increase its sales by 150 per cent since it listed on the JSE in 2010. Also, the business segment increased its contribution to Blue Power's profit from less than 20 per cent (of $11 million in the year ending April 30, 2011) to more than 60 per cent or $45 million in its latest financial year.

The lumber division, which saw revenue grow by just 30 per cent over the past five years, experienced a decline in profitability. The inability to replicate major supply contracts with an internationally funded project in recent years and the increased costs associated with marketing spend squeezed Lumber Depot's bottom line.

Still, the soap maker has been growing by expanding and diversifying its product offerings, including taking a larger share in the toilet soap market which is largely serviced by imports; entering the pharmaceuticals market with products such as ariSulfur; and installing soap wrapping machines that improve efficiencies at the plant and that make the product more attractive.

Mayberry paid $22.6 million, or $12 a share for the 1.9 million BPOW shares this week, but the company has been gradually buying up shares in the soap maker since 2011. That brings down the average price paid for the entire 20 per cent stake to below $9 a share.