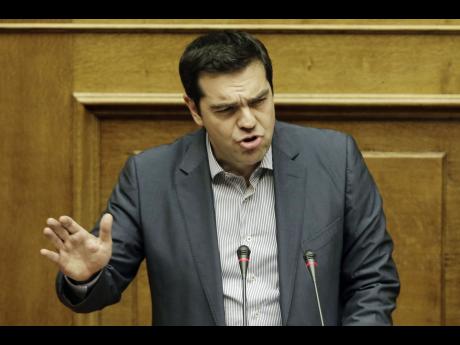 Greek Prime Minister Alexis Tsipras reshuffled his cabinet after a rebellion earlier this week in his party's ranks over the austerity measures, replacing two ministers who voted against him and changing another eight ministers and deputy ministers.

Tsipras made changes to his government in the wake of this week's revolt which saw nearly a quarter of the lawmakers from his radical left Syriza party vote against him.

The austerity measures, which include consumer tax increases and pension cuts, passed with a large majority thanks to the support of three pro-European opposition parties, but left his party and his government wounded ahead of another parliamentary vote on further measures next Wednesday.

Among the changes announced, Tsipras replaced Energy Minister Panagiotis Lafazanis and Alternate Finance Minister Nadia Valavani, and ousted Alternate Social Security Minister Dimitris Stratoulis, all of whom had voted against him on the austerity bill. Valavani had announced her resignation immediately before the vote.

The bill outraged many within Syriza and its junior governing coalition partner, Independent Greeks, for insisting on the very austerity the government was elected to repeal after five years of belt-tightening demanded in return for two international bailouts. Greeks also voted to reject milder creditor reform proposals in a hastily called referendum July 5.

The developments, along with the Greek parliament's approval early Thursday of creditor-demanded austerity measures, contributed to a positive initial assessment from Europe's bailout fund. In a statement, the European Stability Mechanism said it approved a "decision to grant, in principle, stability support to Greece in the form of a loan programme."

The 28-country EU will release a loan of €7.16 billion (US$7.7 billion) in short-term cash by Monday, when Greece has a €4.2 billion debt repayment due to the European Central Bank.

The funds, which will come from a long-dormant EU programme called the European Financial Stabilisation Mechanism, will also help Greece clear arrears with the International Monetary Fund and the Bank of Greece.

The loan will be for three months and disbursed over two instalments, and comes a day after the ECB raised emergency liquidity assistance to Greek banks.

Tsipras has acknowledged the package he signed up to went against his election promises but insists he had no other choice, as the alternative would have seen Greece forced out of the euro — a development that most experts say would have caused massive short-term damage to the Greek economy.

Greece has relied on bailout cash for five years after it was locked out of international bond markets amid concerns over its ability to repay its debts.

Though the austerity implemented by successive governments in return for €240 billion worth of rescue loans reduced the annual budget deficit, Greece's debt burden has swelled to around 180 per cent of annual GDP because of the economic contraction.