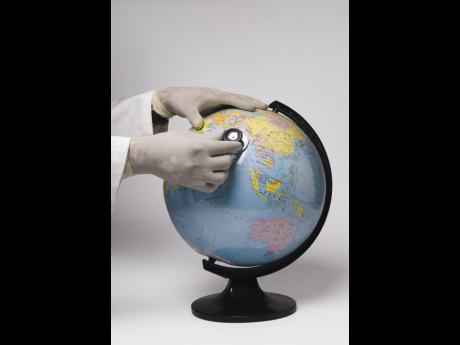 Climate change is an issue on which the Caribbean has every reason to have its voice heard and be taken very seriously.

Not only does its position on changing sea levels genuinely reflect the interests of every Caribbean state - 50 per cent of its population and the majority of the region's productive enterprise and infrastructure is within 1.2 miles of the sea - but the low lying nature of the region, its fragile eco-systems, its ability to demonstrate the changes already occurring in the form of sea surge, more extreme weather, drought, general climatic change, and damage to coasts and reefs, make it a prime candidate to influence international opinion to its own and the world's advantage.

The issue is high on Caricom's agenda and it is a good example of where even a diminished institution can come into its own, demonstrating, in this case, to Caribbean citizens and the world beyond, the region's ability to speak with a single voice in the face of a common threat.

This was particularly apparent at the recently concluded heads of government meeting held in Barbados, though you would have been forgiven for thinking, from the media coverage, that it was all about inter-regional cross-border issues.

Reading its lengthy and detailed declaration on climate action, it is clear that much serious preparatory work has been undertaken, that the Caribbean knows what it wants, and it has an agenda with which it can lead.

In outline, Caricom's declaration observes that Caribbean ecosystems are, in some cases, approaching the limits of their adaptive capacity, and for the region there is an urgent need to close the gap between the mitigation pledges made globally and practical support.

The full declaration which appears on Caricom's website at the end of the Heads of Government Communique makes clear the regions' concerns about the response of the international community to the threats posed by the impact of climate change, and the inadequacy of the financial resources available to date.

While countries in the region are often accused of allowing mendacity to drive their foreign policy, here is an example of the language used being wholly justified, as whatever resources may become available will have to be dedicated to adaptation if parts of the region, quite literally, are not to disappear beneath the sea.

The declaration is strikingly specific.

Not only does it do the obvious by urging the international community, with developed countries taking the lead, to achieve an ambitious, comprehensive outcome when the 196 signatories to previous climate-change protocols meet in Paris this December to discuss the limits to greenhouse-gas emissions, but it also sets out a range of requirements that address the specific circumstances of small island developing states (SIDS) and their need for adequate, predictable, finance, technology and capacity-building support.

In a Caribbean context, it also details some of the key supporting measures and mechanisms required.

Specifically, it stresses the need for the region to receive improved and prioritised access to grant-based financial support to address climate change; calls for the Green Climate Fund (GCF) which is meant to be capitalised to the level of US$100 billion, to play a central role in supporting Caribbean countries achieve low-carbon and climate-resilient development; emphasises the importance of there being a clear process to obtain such funds; and calls for the GCF to receive proposals from the region before the Paris meeting.

It also, which is less common in Caricom documents, calls for the fund to give particular consideration to 'small to medium enterprises in SIDS, including in the highly vulnerable tourism and agriculture industries, given their importance to many Caribbean economies'.

The document additionally proposes that there should be close cooperation between the new global body responsible for compensation for climate-change damage, and the Caribbean Catastrophe Risk Insurance Facility, in order to help develop innovative approaches that address loss, including in the agriculture sector.

It concludes by calling on the international community to ensure an ambitious international agreement that limits global warming to as far below 1.5degC as possible, 'in order to ensure the survival of the Caribbean States and territories'.

What hopefully will make at least some of this achievable is that the preparations for the Paris Conference involve the US and China working separately, and together, to try ensure a positive outcome.

In the past, the sense has been, as at the World Trade Organization, that advanced economies have been reluctant to concede anything that might hold back their right to development and that the US, for domestic political reasons, has been reluctant to make concessions.

As vital as the detail of an agreement on climate change is for the region, the matter also has a strategic importance. It enables the Caribbean to demonstrate an approach that owes more to the future than to the past; it represents an issue on which it has a better chance to exert leverage than others it has chosen to pursue, and it is one that can deliver national and regional development objectives. It is also an issue on which the region occupies the moral high ground.

For small island and low-lying states, climate change is like no other issue, it is existential. Sea levels and water temperatures are rising and, by extension, it will be some of the world's smallest nations that will suffer first.

Although there remains a popular global debate about the causes of climate change, there is governmental agreement that it is due to greenhouse gas emissions, and there is widespread acceptance of the scientific evidence that as a consequence our climate and environment is changing.

Logic would, therefore, suggest that the Caribbean, a region of vulnerable, low or zero carbon emitting states, should be a significant early beneficiary of any resource transfer for adaptation.

This is not a case of special pleading or unsubstantiated entitlement, rather it reflects the need for the region, its people and economy, to pursue with others what has been well thought through, and prepared in good time, and is central to the region having a viable future.

n David Jessop is a consultant to the Caribbean Council. Email david.jessop@caribbean-council.org.