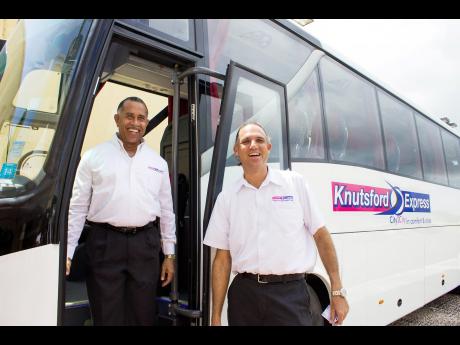 File
Anthony Copeland (left), director of operations, Knutsford Express, and managing director, Oliver Townsend, stand next to one of the coaches at the company's base.

Knutsford Express Services will shell out $15 million through its first dividend to shareholders to be paid on September 15.

The board's declaration of the 15 cents-a-share payment at a meeting last Tuesday gives investors who do not already have shares in the luxury bus company, and those who want to increase their holdings, two more weeks to get in on the distribution. The dividend is payable to shareholders on record as at August 4.

It also represents 21 per cent of net earnings for the year ended May 2015. Knutsford Express posted 44 per cent increase in net profit from the previous year, as revenue climbed by 40 per cent year-on-year to $452 million.

Revenue growth was tempered slightly by a small roll back in fares - $50 per person - across all routes in January, in an effort to pass on savings from reductions in fuel prices.

But the company has been driving growth in passenger travel and, in the last quarter of its most recent financial year, its courier business through the addition of routes. It expanded the number of departures on offer while increasing travel options to passengers along the South Coast by 50 per cent during the first quarter ending August 2014.

Knutsford also added a new luxury coach on its north coast route and diverted its fleet to pass through the middle phase of the North-South segment of Highway 2000 to reduce travel time.

During the third quarter, it again added new routes when it established its Gutters office in St Elizabeth to accommodate commuters from Junction, Southfield and surroundings.

Its latest addition is a service to and from Port Antonio via its Ocho Rios terminal, which was launched in its most recent quarter ending May.

As it turned out, since the company reduced its fares, diesel prices have risen by 15 per cent up to the end of May. This was due to depreciation of the Jamaican dollar; rising US Gulf Coast reference prices, which influence the state-owned refinery's selling prices to local dealers; and the imposition of a new petrol tax by the Government in April.

Despite this, the company managed to keep growth in operating expenses in line with revenue growth. General and administrative expenses rose by 40 per cent from year - earlier levels to $373 million for the year to May.

The absence of any corporate tax expense, which totalled $6 million in the previous financial year, also helped improve the company's bottom line.

Knutsford got the tax concession for listing on the Jamaica Stock Exchange junior market in January 2014, although it just missed the December 2013 deadline to get a full 10 years of tax discounts. It is entitled to five years of income tax remissions.

Since raising the $100 million through its initial public offering, the bus company has spent more than $80 million acquiring new business lines, additional coaches, and upgrading existing buses. During that time, its working capital surplus also grew from just over $20 million to $65 million as at May 31, while its capital base increased by $100 million to $232 million.