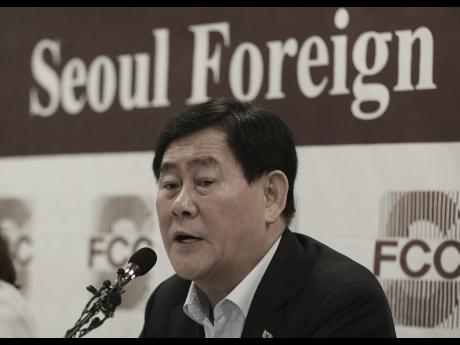 The bitter fight between Samsung and an American hedge fund over a contentious takeover deal shows that South Korea needs to do more to protect shareholder rights, the country's top economic policymaker said Tuesday.

Finance Minister Choi Kyung-hwan said South Korea needs to win trust from overseas investors by making sure that companies protect the long-term interests of shareholders as well as short-term value.

The hedge fund, Elliott Associates, had opposed the takeover of one Samsung company by another, saying the terms of the all-stock deal undervalued its shareholding. The deal was widely interpreted as a manoeuvre to strengthen the Samsung founding family's influence over flagship company Samsung Electronics.

Samsung narrowly won a shareholder vote last week that allowed the takeover to go ahead.

"It was an important chance to look back on many things," Choi said at a press conference with foreign media. "First of all, it reminded us that companies need to strengthen their effort to protect shareholders' interests."

Choi also asked foreign investors to understand the special circumstances of South Korea. Samsung and other conglomerates that dominate the economy are substantially influenced by family ownership even as it dwindles to minority levels.

He said the country needs to strike a balance between the long-term stability of its biggest companies and shareholder rights.

In getting approval for the takeover, Samsung was helped by Korean investors who believed that siding with Elliott was against the national interest.

But the fight also galvanised small South Korean investors who urged Samsung not to put its founding family's interests before that of other shareholders.