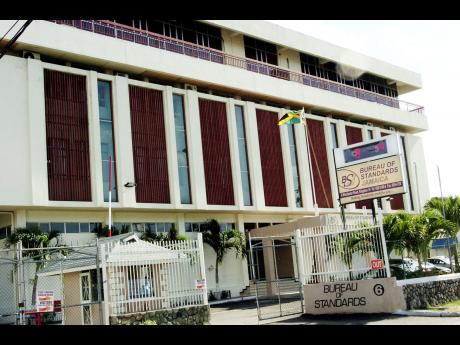 The regulatory division of the Bureau of Standards Jamaica (BSJ) is to be separated from the agency and transformed into a new body called the National Compliance, and Regulatory Authority (NCRA).

The BSJ will stay focused on its core job of developing standards, while the new operation will become the regulator.

NCRA will be responsible for registering processed-food establishments, inspecting goods at ports of entry, and policing compliance in the local market. It will operate from its own building but will be located in the same complex that houses the BSJ headquarters at Winchester Avenue, Kingston, says BSJ acting executive director Maurice Lewin. The regulatory unit is currently housed on the second floor of the BSJ building.

The split is being made to facilitate the implementation of the World Trade Organization's technical barriers to trade agreement "as there was an inherent conflict of interest in the bureau's organisational structure in that the BSJ performs conformity assessments, sets standards, and then seeks to regulate the standards it has set," said Senator Sandrea Falconer at Wednesday's post-Cabinet press briefing.

Manufacturers have shied away from reaching out to the BSJ for help in understanding the standards as they have seen the BSJ more as a policing body than a facilitator of trade, Lewin conceded.

The NCRA aims to create a more encouraging environment, he said.

"One of the problems that we found is that you have manufactures who were reluctant to call the BSJ because they feared that if they discussed a challenge that they were having, the BSJ would simply send out its regulators to them. This will now change," Lewin told Sunday Business.

"Prior to this decision, you could not call the BSJ and say 'Look, I don't know what to do to meet the standard. They say I have breached and I don't understand what that means', because as far as you are concerned, it's the same person that just cited you."

The standards agency will also now be able to offer technical assistance to companies seeking to comply with standards.

"We weren't able to do this before because we were the ones who policed the standards, (but) the BSJ has now become more trade facilitatory," the agency head said.