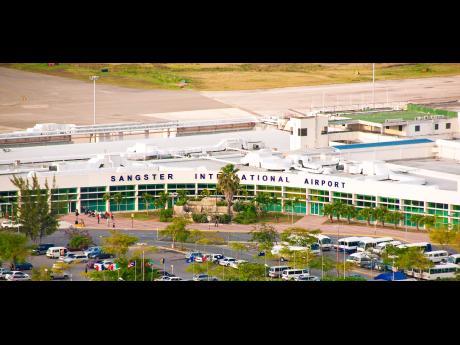 File
An overhead view of the Sangster International Airport in Montego Bay, Jamaica.

The new operator of the Sangster International Airport is realising tighter income margins than its predecessor, even while traffic increased in the first half of 2015 compared to year-earlier levels.

That is not to say that business at the Montego Bay airport isn't doing well.

Mexican firm Grupo Aeroportuario del PacÌfico (GAP), which bought a 74.5 per cent in MBJ Airports from Abertis in April, disclosed that the Jamaican operations cleared 93 million Mexican pesos (US$5.7 million) in net income from 640 million pesos in revenue for the six months to June. That is a net margin of 15 per cent.

GAP did not say how that compared with the corresponding period last year, but the previous operator of the airport reported a 22 per cent net margin for 2014. Operating expenses as a percentage of revenue remained unchanged at 60 per cent.

The financial performance for the first half of the year - during which period the airport typically handles 53 per cent of its annual traffic volumes - reflected 6.7 per cent year over year growth in passengers.

Still, that represented strong growth in tourism arrivals between the winter and summer months, and Sangster is at the centre of the tourist corridor between Negril and Ocho Rios, where 90 per cent of the island's hotel capacity is located.

Jamaica Tourist Board data showed that total stopover arrivals increased by 4.2 per cent year on year during the first five months of 2015, albeit growth in visitors during the month of May was just 1.3 per cent.

New air service should help deliver higher numbers in the second half of the year.

The airport operator would have seen some of the benefit of additional air lift in the second quarter as Vacation Express commenced flights from Hartsfield-Jackson International Airport to Sangster in the middle of May, increasing capacity out of Atlanta by six per cent.

Moreover, Southwest Airlines will start daily flights from Houston on November 1. United Airlines, which currently services that route, historically ramps up the number of trips from Houston to daily flights during the summer months - more specifically, in June and July - before ramping it down for the fall months. So Southwest should pick up the slack.

American Airlines is also starting twice weekly flights from Los Angeles to Montego Bay on December 18, albeit the Boeing 737-800 it plans to use for that service will translate into 300 more seats a week each way.

In any case, the current rate of growth posted by the JTB and MBJ Airports so far supports the Montego Bay operations, seeing at least an additional 150,000 passengers passing through the terminal this year.

During 2014, Sangster served 3.6 million terminal passengers, of which 66 per cent were from the United States, 20 per cent from Canada, and 11 per cent from Europe, according to MBJ Airports.