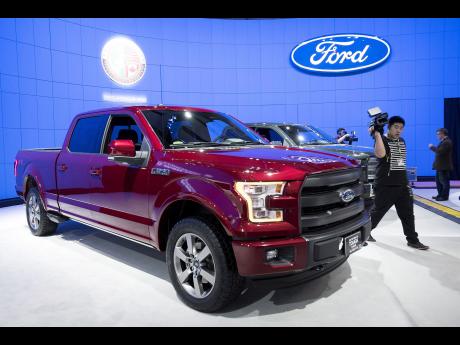 AP
In this February 12, 2015, file photo, members of the media photograph a Ford F-150 Super Crew at the 2015 Canadian International Auto Show in Toronto.

The four-door Super Crew version of the 2015 F-150 got top ratings in all five of the crash tests performed by the Insurance Institute for Highway Safety (IIHS). For now, it is the only full-size truck on the market with the institute's Top Safety Pick rating.

But the Super Cab version, which has a smaller rear door and back seat, did poorly in a small front overlap test, which slams 25 per cent of the front of the truck into a barrier at 40 miles per hour. It didn't earn the top safety award.

The Insurance Institute also said it took longer for a local Ford dealer to repair the aluminium truck than an older steel one, and the aluminium parts cost more. The institute said the repair costs were 26 per cent higher for the aluminium-bodied truck.

In a statement, Ford said the new truck is the "safest F-150 ever" and noted that it has the government's highest five-star safety rating. But the company said it will make a design change in the 2016 model year to improve the crash performance of the Super Cab and Regular Cab models.

Ford said the Super Crew - which got the top safety award - accounts for 83 per cent of all F-150 sales. The Super Cab makes up around 12 per cent and the Regular Cab accounts for five per cent.

Ford spokesman Mike Levine also said independent consultants have shown that average repair costs for the new truck are less than for the old truck.

The results are a key test for Ford, which switched from steel to aluminium for the body of the truck late last year. The switch makes the truck lighter and nimbler and saves fuel, but it was risky, since the F-150 is the first mass-market vehicle to make such a change. The F-150 has been the best-selling vehicle in the US for more than three decades.

David Zuby, IIHS's chief research officer, said the organisation tested the F-150 first because there is so much interest in the aluminium body. Competitors from Chevrolet, Toyota and others will be tested this fall, he said. The small front overlap test was added in 2012, he said, so the F-150 was the first truck to go through it.

Zuby said the aluminium on the F-150 was strong and safe and performed well. Differences in the steel frame under the aluminium resulted in the different test outcomes. The Super Crew version had extra, horn-like pieces of steel fitted to the front of the frame to help the vehicle absorb the force of the small overlap crash. The Super Cab and the two-door Regular cab - which the institute didn't test - don't have those extra pieces of steel, but will get them in 2016 versions.

The Super Cab truck got "good" ratings on four other tests, including roof strength, side impact and a moderate frontal test, which hits a larger portion of the vehicle into a deformable barrier that's meant to replicate another vehicle. But in the small overlap test, the front compartment crumpled and the crash dummy's head missed the side airbags and hit the instrument panel.