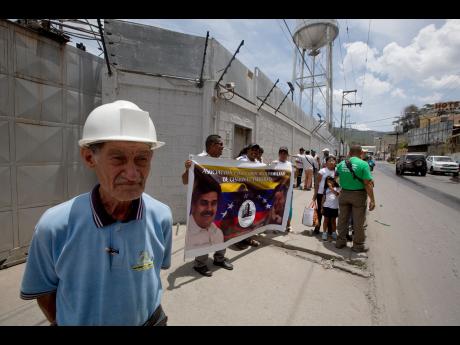 Venezuela's largest food distributor last Thursday denounced the government occupation of a Caracas warehouse amid accusations that the company is hoarding goods.

Soldiers took over the warehouse complex used by Empresas Polar late Wednesday, just as Venezuela's federation of brewers announced that Polar's beer manufacturing subsidiary is shutting two of its six plants because of a lack of imported barley.

The South American oil-exporting nation is grappling with chronic shortages of all kinds of staples from sugar to toilet paper, which businesses blame on the socialist government's economic policies.

President Nicolas Maduro has accused Polar of sabotaging the economy by hoarding goods and intentionally creating shortages, a charge the company denies. As December congressional elections approach, Maduro has been levying frequent attacks on sectors that he claims are staging an economic war against Venezuelans.

Workers said the takeover was intended to provide land for new houses, another resource that has become scarce in Caracas in recent years, pushing people to live in shacks in the hills outside the city.

Polar executive Manuel Felipe Larrazabal asked the administration to reconsider the occupation, saying it had already paralysed the company's supply chain in the capital.

"We're not questioning the desire to build homes, which are so necessary, but we wonder why there is this need to disrupt active industrial facilities," he said Thursday.

The Ministry of Housing declined to comment on the takeover of the complex, which is also used by several other large companies, including PepsiCo Inc, and Nestle SA.

Some of the 650 employees that Polar said work at the warehouse protested against the seizure as armed police looked on. Government supporters staged a counter-demonstration outside the complex. By nightfall, the crowds had mostly gone home.

It has been a rough couple of weeks for Polar.

In addition to the beer plant closures, which the brewers' federation said could affect a quarter of domestic beer production, Polar has also been embroiled in a dispute with union workers demanding pay raises.

Members of some of the dozens of unions representing Polar workers have limited distribution of the small bottles of light beer that are favoured in Venezuela. While there are no signs of shortages on shelves so far, the company says it is struggling to get deliveries to the central part of the country.

Earlier this month, the head of Venezuela's liquor store federation warned that the nation was about to run out of beer because brewers had reached "zero hour" amid widespread shortages in raw materials. Days later, he was detained for reasons that remain unclear.

Polls suggest most Venezuelans are not buying Maduro's economic war narrative. On Thursday, residents of the humble homes around the warehouse complex came out to show support for Polar and its employees.

Luis Ignacio Moreno said the housing situation is dire, but there is no need to pit one group's needs against another's.

"I want them to build, but not to drive Polar out. That's where a lot of my neighbours work," he said.