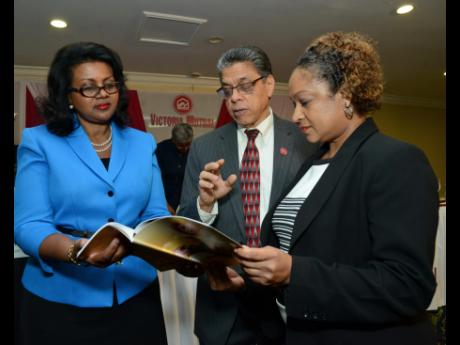 The Victoria Mutual Building Society (VMBS) closed out its last financial year with balance sheet assets of $97.3 billion, reflecting growth of 13 per cent, and was supported by adequate levels of capital, said president and CEO Richard Powell.

The ratio of capital and reserves to total assets was 11.7 per cent, a level which significantly exceeds the standards set by the regulators, Powell told members at the society's annual general meeting in Kingston on Thursday.

The restatement from $1.3 billion to $795 million was due to the reclassification of funding provided by a subsidiary and used for the acquisition of Prime Asset Management Limited, which was originally accounted for as dividend.

After legal review the amount received was deemed to be a loan and that led to the need for a restatement, Powell said.

The society's deposit liabilities grew by 11.8 per cent to $70.7 billion in 2014 and by virtue of that performance increased market share from 8.4 per cent to 8.7 per cent of the market of deposit takers, inclusive of the building society and commercial banking sectors.

"The number may seem small, the increase (that is), but when you are applying a relatively small number against a pretty large base it does count for quite a bit," the VMBS CEO said.

The ratio of capital and reserves to total assets was 10.5 per cent, appreciably above the six per cent required by the regulators.

In 2014, VMBS disbursed $5.72 billion in mortgage loans, an increase of 74 per cent when compared with the previous year.

During the period, it received $2.46 billion by way of principal repayments, the net effect of which was a $3.26 billion or 12.6 per cent increase in the size of the society's mortgage portfolio.

Subsidiary VM Wealth Management had the best year on record, Powell said, recording an increase of 61.5 per cent in after tax profit to $236.7 million resulting from diversification of its product line and expertise. This was due to a 35.6 per cent increase in other operating revenue as net interest income remained flat at $314.8 million.

The principal contributors to the enhanced performance were gains from investment activities which contributed a net increase of $88.1 million, a year over year increase of 128.4 per cent, principally representing bond trading activity. Net fees and commissions were up 116 per cent from $58.4 million to $126.2 million, driven by corporate financial services.

"Those two areas are not traditional businesses of the building society, but as we move to retool that business model we are now seeing the benefit from the two or three areas that we have been working at," said Powell.

"It sets up VM Wealth nicely with the new dispensation that is now here," Powell said, noting that under the International Monetary Fund agreement there will be a phasing out of the repo business, "which is what a lot of these broker-dealers used to hang their hats on", while admitting, "the truth is we did too".

"One of the implications of the phasing out of the repo business is that broker-dealers won't be able to offer repos and therefore investors who have had money in those instruments now need alternate channels in which to invest those funds," said the VMBS president.

VM Wealth plans to issue some other products, including unit trusts, but is awaiting the approval of the regulatory authorities.

Victoria Mutual Property Services Limited experienced a decline in profit in 2014, sustaining an almost $500,000 loss, compared with a profit of $3.1 million in 2013.