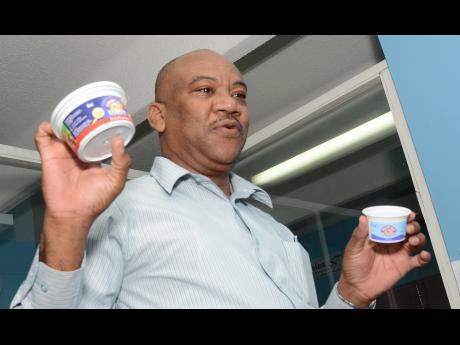 The marketing programme targets teens and young adults who are otherwise unemployed, who will be given specially equipped tote bags to keep the ice cream and other treats frozen as they peddle them.

The campaign also has a demographic element - it is meant to reple-nish longstanding sellers who are ageing out of business.

"The objective is to get about 200 new vendors across the island handling the product in this distribution push," said newly minted sales and marketing manager Dave Lee. Seven have signed on to date.

The programme requires each vendor whom Smith & Stewart adds to the network to invest around $3,000 at start-up to acquire the Crazy Jim products. For now, the 'freezer tote bags' are free.

This is the ice cream maker's second campaign in four years to grow its business, the first of which tapped into micro traders.

In 2011, Smith & Stewart partnered with JN Small Business Loans Limited (JNSBL) to lend $60,000 to $150,000 to individual small operators already in business to finance the acquisition of freezers, as well as ice cream and other frozen products made by Crazy Jim.

This time around: "The focus is on increasing the number of contact points for the consumer in our 'eat on the go' campaign," Lee told Wednesday Business. "It's grass-roots marketing, so the channel is low price. It is also designed to have more persons handling the products and to have it everywhere."

"We went for a younger generation of vendors or micro-entrepreneurs to distribute the product because what you find happening now is that a lot of our vendors are old or have passed on," he said. So far, in response to the recruitment drive, "a lot of 18 and 19-year-olds are the ones coming to us", he added.

It is up to the vendors to select the locations from which to sell, with minimal guidance from the company.

Smith & Stewart Distributors is expecting a 10 per cent revenue lift in the next six months through the new distribution channel, but Lee declined to comment on the company's current annual sales.

The additional earnings will feed into infrastructure upgrades at Smith & Stewart's complex in Kingston, but Lee was tight-lipped on the details.

"In terms of infrastructure, we are just positioning ourselves now to do that by increasing the amount of merchandising. We need freezers, so we have bought some, and there is a big programme that is going to be implemented," he said.

The company is rolling out the street vending distribution model islandwide and will position its sales agents "just like the other persons that you see out there with sodas and fruits", in areas with high volumes of vehicular and pedestrian traffic. Jamaica Producers Group, for example, has used the model to boost the sale of ripe bananas.

Crazy Jim's street vendors have to foot their own capital to start up, which could be around $3,000, which Lee said is enough to fill their containers with products to sell.

For now, the company is giving the 'freezer bags' to its vendors, but this arrangement may change.

"I'm still working out that part. For those that we have started with, we make it available to them, but I think what we have to do is sell it to them or they sign some form of vending contract," Lee said.

Alongside the vending programme, Crazy Jim is also considering adding flavours currently sold only in bulk form to its retail distribution portfolio.

Lee says 80 per cent of the company's sales are from bulk supplies, with hotels and schools as big markets.

Smith & Stewart/Crazy Jim has seven depots spread across six parishes, including Manchester, where the company sells through an independent distributor based in the capital town of Mandeville.