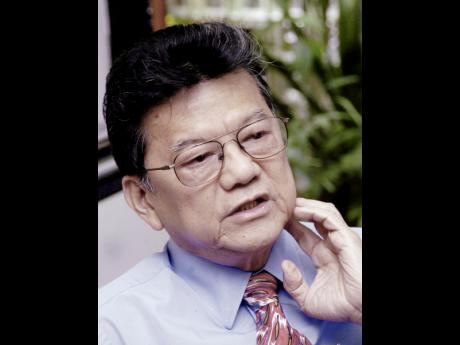 THIS IS the final year of Lascelles Chin's ambitious three-year goal to double profit at the three affiliated LASCO companies that he chairs, and the manufacturing business just might make it.

LASCO Manufacturing Limited (LASM) posted a $247-million net profit, or a 75 per cent rise in earnings during the first quarter of its current financial year which began April 1.

"Production capacity at the liquid plant has already been doubled during this quarter to meet the overwhelming market demand for our iCool line of beverages," said a report to shareholders of LASCO Manufacturing accompanying its latest financial statements.

Further investment in new equipment to increase capacity is planned for this year. A new dry plant at White Marl will be fully operational by September to achieve full efficiency. Additional products will hit the shelves once the expanded operations settle in.

"There will be new products coming on stream by the end of the year and the future looks bright for the operation with significant sales and profits," said the report signed by Chin.

He is expecting future revenue and profits from liquid and powder operations within a year or two to be "exciting".

However, if the manufacturer maintains growth levels recorded in the first quarter through to next March, then earnings will fall about nine per cent shy of the $1.3 billion LASM would need to earn this year to double its 2013 income.

The other two affiliates are even further behind using the same projection. Lasco Financial Services (LASF) posted $54 million, or a 14 per cent increase in profit after tax for the first quarter, while LASCO Distributors (LASD) saw its net income climb by 45 per cent from year-earlier levels to $132 million.

Maintaining those growth rates would see LASD missing the $1-billion target by 17 per cent and LASF falling 33 per cent shy of its $330-million goal - or at least the target set by Chin when he laid down the gauntlet at one of Lasco's annual general meeting nearly two years ago.

Combined, profits of the three affiliates would be 70 per cent higher than they were in the 2013 financial year.

Still, just like LASM, the financial firm and the distribution company are seeing significant gains from their respective expansion activities.

"Growth continues to be driven by our marketing efforts in the diaspora, expansion of services through our remittance agent network, expansion of our cambio network and our thrust to increase our loans business," said a report to shareholders of LASF accompanying its latest financial statements. The opening of a branch in Portmore was the latest addition to the network.

The firm's expansion drive resulted in a 35 per cent increase in administrative cost, which tempered earnings growth.

LASCO's new beverage line - iCool - and the taking over of distribution of the full range of Unilever products last November, helped boost LASD's revenue by close to $1 billion, or 38 per cent higher than year-earlier levels during the three months to June.

The distribution deal brought brands such as Lipton and Red Rose teas; I Can't Believe it's Not Butter; Ben & Jerry's ice cream; and personal care products, including VO5 and St Ives, into its portfolio.

Higher sales were converted into an improved bottom line as the pace of growth in expenses stayed in line with revenue growth.