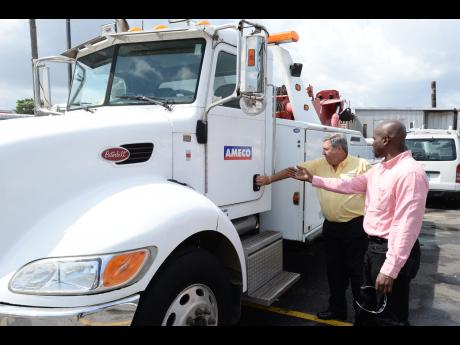 Brian Pengelley has been running the Jamaican operations of Ameco since March, an American-owned equipment company that has done business in Jamaica for close to two decades.

Pengelley was said to have been headhunted for the job to replace Patrick Doyle, who was on the verge of retirement and has since headed back home to Texas.

Ameco Caribbean Inc, which operates from Spanish Town Road in Kingston, is in the business of fleet management. Its own stock spans more than 1,200 cars, pickups, trucks and even cranes, which are leased to companies and maintained under contract, according to Pengelley, who says Ameco Caribbean serves some 25 corporate clients, including Jamaica Public Service Company, Caribbean Broilers Group, and Red Stripe Jamaica. It also maintains vehicles for Digicel and LIME.

Pengelley himself was director of sales at Red Stripe up to his retirement from the beer-making company last year. He told the Financial Gleaner that he was running his own consultancy when he was tapped for the job as Ameco's country manager.

He is already looking to explore new market segments, with plans to potentially expand into the leasing of farm equipment.

Ameco Caribbean has operated in Jamaica since 1998. Its lease contracts generally last 60 months after which the assets are written off the books, Pengelley said.

At the end of the period, Ameco either sells the unit on the open market or the client acquires the unit at book or residual value to dispose of as they see fit.

"We take away the concern of capital investment and maintenance, so all our customers have to do is worry about their own business and how do they grow it because the facilitation of truck, cars, pickups and so on, falls to us," said Pengelley.

The Jamaican operation is a wholly owned subsidiary of American Equipment Company, which, in turn, is owned by global construction company Fluor Corp.

Outside of Kingston, Ameco Caribbean has three other major operating centres in Mandeville, Runaway Bay, and Montego Bay, and five satellite operations housed on clients' premises.

The equipment-leasing side of the business serves the construction, mining and haulage sectors with cranes, rigs, tractors and excavation equipment.

They also partner in a unique way with entities in the construction sector, where they lease equipment and tools that building contractors need.

"We have what is called a tool crib - that is a 40-foot container - and we work with a contractor who is going to be on site for, say, 12 or even 24 months. We will equip this container with the tools and safety equipment that they need on site and they can check out or return the equipment as needed ... we provide everything and they just pay for it for the life of that contract," Pengelley said.