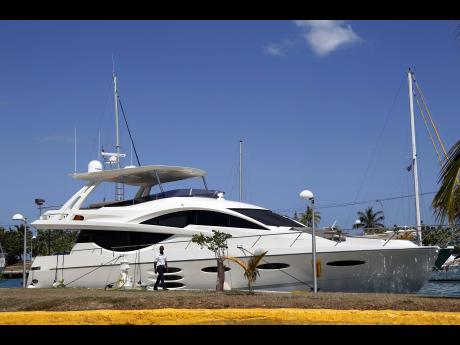 AP
A security guard walks beside the US yacht Still Water, moored at the Hemingway Marina in Havana, Cuba, Thursday, August 6, 2015. For the first time in decades, the American government is authorisng a wide range of large-scale sea travel to Cuba.

A US$3 million yacht left Key West this week with two barbeque grills, 250 channels of satellite TV, and a just-in-case plan for rescuing stranded Cuban rafters encountered in the Florida Straits.

After four hours smooth sailing, the Still Water tied up at Havana's Hemingway Marina. The well-heeled passengers breakfasted on smoked salmon and pastries then boarded an air-conditioned Cuban government bus for a day of touring the city.

The Cold War made the Florida Straits into a stage for nuclear showdown and a graveyard for thousands of Cuban rafters seeking better lives in the United States. Now, normalisation of the long-tortured US-Cuba relationship is transforming the 90 miles between the US and Cuba back into a playground for hulking cruise ships and sleek luxury yachts.

For the first time in decades, the US government is authorising a wide range of large-scale sea travel to Cuba. Since declaring detente in December, the Obama administration has issued permits to dozens of sailboats, at least five ferry companies, four cruise lines, and the Palm Beach-based yacht broker that chartered out the Still Water. The 78-foot yacht features satellite Internet, four staterooms, and a wet bar.

"It's a little bubble. You can have the comforts of home in Havana," said Jim Friedlander, president of Academic Arrangements Abroad, which helped organise the trip.

Cuban tourism officials and US boating aficionados and entrepreneurs are salivating about a possible return to the go-go days before Cuba's communist revolution when thousands of well-heeled Americans a year sailed to Havana for long weekends of tropical leisure.

"What's the natural market for nautical tourism in Cuba? The United States of America - the No. 1 country in the international yachting market," said JosÈ Miguel Diaz Escrich, commodore of the International Hemingway Nautical Club of Cuba. "We're talking about tens of thousands of yachts that might come."

Fidel Castro in 2005 called cruise ships "floating hotels" that "leave their trash, their empty cans and papers for a few miserable cents." But under his brother and successor as president, Ra?l Castro, the government appears to have no such reservations. Cuba has been rapidly approving port calls by US cruise ships and planning new marinas with thousands of slips for yachts in the polluted Bay of Havana and at the white-sand resort of Varadero, about a 90-minute drive away.

Even the first stirrings of a boating boom are giving rise to surreal, startling contrasts as increasing numbers of expensive pleasure boats ply waters where Cuban fishermen bob on taped-together chunks of packing foam and a rising flood of emigrants head north on rickety rafts.

The rise in leisure-boat trips is a sign of the two countries' eagerness to make normalisation irreversible by future US administrations, experts say.

"For a long time, the atmospherics weren't right. Cocktail hour on the poop deck and cruising were redolent of tourism. (But) the Obama administration as it goes into overdrive in its legacy building on Cuba doesn't appear to me to have a lot of time to worry about that sort of thing," said Robert Muse, a specialist in US law on Cuba who represents a newly licensed US ferry company.

Muse said he thinks boat travel to Cuba will remain limited because of mutual sensitivities about the Florida Straits, the scene of high-sea dramas such as the Cuban Missile Crisis and the Mariel boatlift.

Still, Cuban tourism experts seem confident about an imminent end to restrictions on boat travel to Cuba, which have been loosened and tightened in cycles since President Jimmy Carter briefly legalised travel to the island in 1977.

Many US yachters, including several docked at the Hemingway Marina on Thursday, have quietly stopped in Havana for years on their way to or from other ports, the same way US air travellers head to Cuba from Canada or Mexico in defiance of rarely enforced American laws.