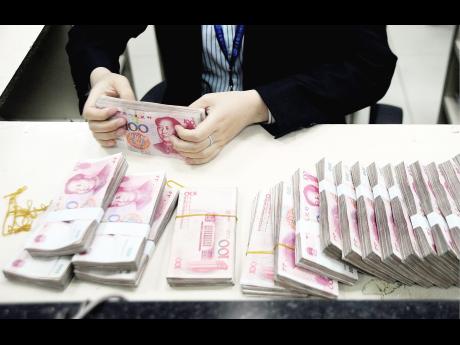 AP
A clerk bundles Chinese yuan notes at a bank in Hefei in central China in April 2010.

China's bold move Tuesday to sharply devalue its currency threatens to squeeze exporters around the world whose goods will likely become comparatively costlier than many Chinese products.

The action has also intensified fears about the weakening of the world's second-largest economy, whose growth rate has reached a six-year low as exports have steadily dwindled.

A cheaper yuan will benefit China's exports by making them less expensive overseas. Yet, those gains would come at the expense of manufacturers in other countries, including the United States and Europe.

US exporters have long complained that China manipulates its currency to gain a trade advantage. Some members of Congress have backed legislation to impose retaliatory tariffs.

As China's once-breakneck growth has slowed, its reduced demand for foreign raw materials - from oil to coal to copper - has, in turn, slowed growth in countries like Australia and Brazil.

On Tuesday, China's central bank said the devaluation of the yuan is a result of reforms intended to make its exchange rate more market-oriented.

China becomes the third major trader to take actions that weakened their currencies. Initiatives by Japan and the European Union over the past two years depressed the yen and euro.

Those moves contrast with action expected from the Federal Reserve, which is widely expected to boost the short-term interest rate it controls later this year. A Fed rate hike would likely raise the value of the dollar, which has already jumped about 14 per cent in value in the past 12 months against a basket of foreign currencies.

The rising dollar has hurt US exporters by making their goods more expensive overseas. China's decision to devalue its currency could further complicate the Fed's decision on when to raise rates.

Analysts cautioned against seeing Beijing's move as a direct effort to help Chinese exporters. The yuan had strengthened in tandem with the dollar, hurting Chinese exporters and imperilling jobs in manufacturing industries that employ tens of millions of workers. July exports fell by an unexpectedly large margin of 8.3 per cent from a year earlier.

Beijing is likely to move cautiously, but market expectations of further weakening "could quickly become entrenched" and cause the yuan to "depreciate quite quickly and significantly," said Wang. She said that would represent a "sea change in China's exchange rate policy" but would help to support flagging economic growth.

The devaluation could present a dilemma for the United States and other governments that accuse Beijing of suppressing the yuan's exchange rate, giving its exporters an unfair price advantage and hurting foreign competitors.

A weaker yuan might prompt complaints by foreign manufacturers. But the central bank said its goal was to give market forces a bigger role, a step Washington has demanded.

If the changes help to support Chinese exports, "that could help sustain regional trade and, in turn, help support global growth," the governor of the Philippine central bank, Amando Tetangco, told The Associated Press.

The yuan, also known as the renminbi, is allowed to fluctuate in a band two per cent above or below a rate set by the People's Bank of China based on the previous day's trading.

The bank said starting Tuesday that in addition to the previous day's exchange rate, the daily fixing of the trading band will take into account supply and demand.

"This complex situation is posing new challenges," said a central bank statement. It said a strong yuan is "not entirely consistent with market expectation" and this was a good time to adjust controls.

The centre of Tuesday's trading band was set at 1.9 per cent below Monday's level. The yuan quickly fell 1.3 per cent against the dollar and was down 1.9 per cent by the afternoon.

That was the biggest one-day decline since Beijing ended the yuan's direct link to the US dollar in July 2005 and switched to basing the exchange rate on a basket of foreign currencies. The composition of that basket is secret but the dollar appears to dominate it, which means the yuan rose even as currencies of other developing countries fell.

The latest move doesn't appear to be aimed at helping Chinese exporters even though it follows last weekend's announcement of dismal July trade, said Mizuho Bank economist Vishu Varathan in a report.

The yuan has risen by about 3.5 per cent per year since 2012 on a trade-weighted basis and the latest change only gives back part of that, according to Varathan.

A sustained decline "risks abrasive international trade dynamics," said Varathan. But he said a weaker yuan "could be ultimately positive for Asia" if it helps to revive Chinese growth and demand for imports.