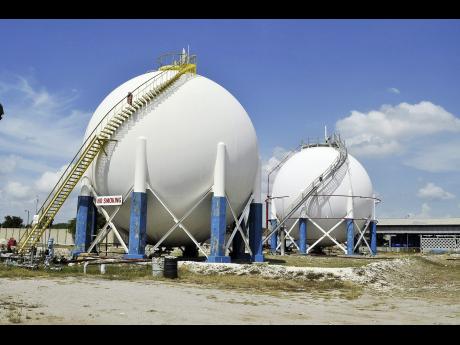 A section of the Petrojam oil refinery in Kingston. Jamaica purchases oil from Venezuela under the PetroCaribe arrangement through the state refinery.

The agreement reached between the Jamaican Government and Venezuela to buy back the debt owed for oil under the PetroCaribe arrangement will be part of the focus of a team from the International Monetary Fund (IMF), which visits the island

The team will conduct the review between this and next week. The implications of the buy-back agreement will be part of the discussions, according to an IMF official.

Finance and Planning Minister Dr Peter Phillips on Monday said the transaction will allow for a reduction in the nominal public-debt stock from $2.1 trillion to $1.9 trillion or $164 billion.

Addressing a press briefing at the ministry's Heroes Circle office in Kingston, Phillips said, "This is contrary to the notion that has been posited in some circles that the Government is increasing the country's debt," noting that the arrangement will not require higher taxes as has also been suggested.

He said the transaction was based on the net value of the debt outstanding, at December 2014, and represented a very large percentage of what is owed under the programme but not the total amount.

"The remaining outstanding amount attests to the commitment of the Venezuelan authorities to the continuation of the PetroCaribe facility," the minister said.

In its regional economic outlook for the Western Hemisphere in April, the IMF had suggested that lower oil prices have heightened the risk of disruptions to the PetroCaribe programme through which Venezuela has been providing subsidised financing of oil imports to many partner economies in the Caribbean and beyond.

Phillips said the US$500 million that has been set aside from the recent US$2-billion bond issue will be used for budgetary purposes, enabling the Government to ensure that the 2015-16 budget is now fully funded and insulated from any adverse market conditions that may develop.

He said the allotment ensures the $62 billion, to be paid out on maturing bonds issued under the National Debt Exchange (NDX) in February 2016, is possible.

The NDX, aimed at reducing the country's debt stock, was part of the prerequisite for the signing of a US$932.3 million four-year extended fund facility with the IMF in May 2013.

During its two-week visit to Jamaica, the IMF mission will review fiscal and monetary indicators, including the level of the primary surplus, which was slated to climb to $17 billion in June, as well as the Net International Reserves, which was targeted to reach US$1.34 billion, but which had already surpassed that figure.

The team will also review the structural benchmarks for the quarter, among them the June target for undertaking strategic amendments to the Customs Act to facilitate the introduction of a modern integrated customs-management system consistent with international standards and best practice.

Another was automating tax and customs operations by implementing the full function production version of the automated system for customs data (ASYCUDA) world-integrated customs-software package for the entire country after completing pilot testing covering imports and exports at the Kingston port by end May 2015.

Among the requirements under the IMF programme to ensure adequate monitoring of economic variables and reforms, the Jamaican Government has agreed to provide the balance sheet of the PetroCaribe Development Fund, with a lag of no more than six weeks after the closing of each month.

It also agreed to provide information on use of the PetroCaribe Development Fund, including loan portfolio by debtor and allocation of the liquidity funds in reserve within six weeks after month end.