NIF has eight-year wait for returns on Braco resort 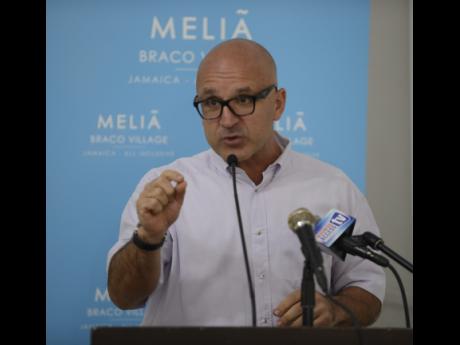 In addition to the near $3-billion that the National Insurance Fund (NIF) is pumping into the transformation of the Braco resort in Trelawny, the pension fund will be providing working capital to run the operation under its agreement with hotel company Meli·.

The hotel is to operate as Meli· Braco under a 15-year lease to the Spanish chain.

Audrey Deer Williams, the NIF's senior director for investments, says the budget for the first period was awaiting approval, and as such, would not be disclosed. She said a portion of the hotel's financing needs would come from the income generated by the property in the first year.

Meli· Braco will open for business in December following US$23.5-million ($2.76-billion) of upgrades. Dimitris Kosvogiannis, general manager of the resort, speaking on the margins of an event held to update the media on Tuesday, said that he expected to see profit from operations in the first year from projected revenues of US$20 million.

Kosvogiannis, who was appointed general manager in July 2014, and is now overseeing the start-up of Meli· Braco, says the US$23.5 million refurbishing budget is to be fully expended by December, and that no cost overruns were anticipated on the resort upgrade, which includes the remodelling of all 225 rooms.

It will take eight years, he said, for the NIF to realise a return on its investment - a calculation based on 70 per cent occupancy each year and the rates being offered for this coming winter. The room rates were not disclosed, nor were they available online.

Costs including staffing, utilities, and food and beverage, will be significantly below that figure.

"From experience in other hotels, costs are approximately 60 to 70 per cent of revenue. With prudent management, profit should be 35 per cent of revenue," said the hotelier, whose last job was country manager for the Palladium hotel properties in Jamaica.

Meli· Braco will be hosting job fairs, starting in September, to recruit the 440 workers needed for the resort - spanning 14 job categories.

Kosvogiannis said Meli· was likely to hire staff away from other hotels.

Ministry of Labour representatives present at the event said that only 10 work permits have been issued for expatriate workers at the property.

Director of Tourism Paul Pennicook described Meli· Braco as an up-market product. Kosvogiannis said that description related to both the product quality and room rates.