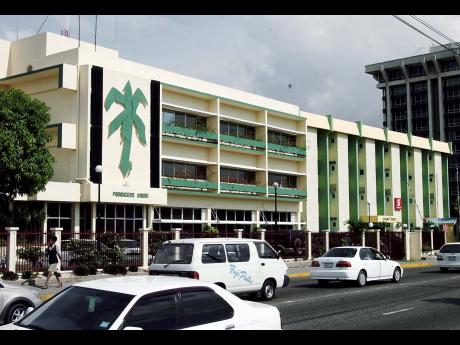 File
File Producer's House, the corporate base of Jamaica Producers Group, on Oxford Road, New Kingston, is seen on the right in this December 2005 Gleaner photo.

Jamaica Producers Group (JP) has sold its office complex located on Oxford Road in New Kingston for over $300 million, but its corporate headquarters will remain there.

The buyer of the property known as Producers House was not disclosed.

The food and logistics conglomerate offloaded the property as part of its initiative to reduce its "holdings of various passive portfolio equity securities and certain non-core or non-operational real estate holdings and to redeploy the sale proceeds in line with our current areas of focus", according to its latest financial statements.

"We now occupy less than one-third of the space in this office unit and will continue to occupy these offices under a lease arrangement with the purchaser," wrote JP Chairman Charles Johnston in his report to shareholders.

Redeployment of proceeds from gains on disposal of properties, which totalled $426 million for the first half of 2015, towards investments is reflected in plans to commence the renovation and expansion of a 24,000-square-foot shared services, cold storage and distribution centre in the Cross Roads area of Kingston this year.

That project is estimated to cost just $40 million, but it is a centrepiece of JP's three-year plan to reduce the number of sites from which it operates by 25 per cent. It also aims to have at least 50 per cent of its sites operating with two or more of its business lines.

Already, the group has seen its administrative and other operating expenses come in at year-earlier levels, or around $336 million for the 13 weeks to June 27. Its gross profit declined from $550 million to $522 million, but the one-off gain from disposal of its Oxford Road office and its earnings from associated companies and joint ventures, helped push up net profit to $390 million, up from $80 million in the corresponding period last year.

Share of profit jumped from $99 million to $172 million in the quarter under review.

Among those investments, Kingston Wharves Limited (KWL) proved to be the biggest earner for JP during the review quarter.

"Kingston Wharves experienced a 39 per cent increase in its net profit for the 2015 year-to-date compared to the first half of 2014," said the JP chairman in his report to shareholders. "This resulted from improved volumes of cargo handled by the port."

Higher earnings from the stevedoring firm also reflected JP's increased ownership stake in KWL from 30.2 per cent to 42 per cent last September.

The latest results suggest that the profitability of JP's collective investments in other companies improved in the second quarter.

Combined share of profit, excluding KWL, rose from just over $30 million in the second quarter of 2014 to over $40 million in the quarter under review. JP has stakes in Mavis Bank Coffee Company, Four River Mining, and rum cake maker Tortuga.