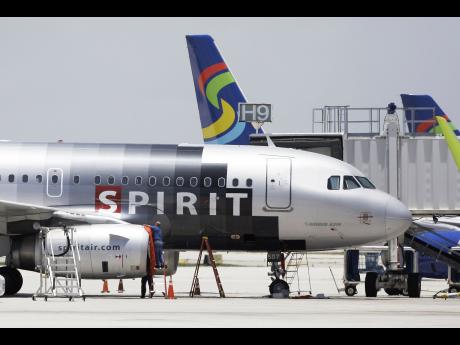 If you get on a Spirit Airlines flight, there's a 50-50 chance that your flight will be late.

Perhaps then it is no surprise that Spirit has the highest complaint rate of any major United States airline.

Spirit, a low-fare, high-fees carrier with a clientele of mostly leisure travellers, had by far the worst on-time performance in June among 14 airlines tracked in a government report. Only 49.9 per cent of its flights arrived within 15 minutes of schedule, which is the government's definition of being on time.

It was the worst on-time performance by a major airline in 10 years.

Spirit declined to make an executive available for an interview. In a statement emailed to The Associated Press, spokesman Paul Berry blamed cancelled flights on bad weather, which he said had an outsized impact on Spirit "because of where these storms hit, our fleet size, and our network".

Spirit had the second-highest rate of cancelled flights in June. Berry wrote that with better weather lately, "our operations are back to normal".

United Airlines had the second-worst on-time rating, at 66.3 per cent. "It wasn't the performance we like to provide for our customers," said spokesman Charlie Hobart. He said maintenance issues and bad weather thunderstorms at one of United's hub airports on 25 different days, he said contributed to the delays.

Overall, airlines covered by the US Department of Transportation report operated 74.8 per cent of their flights on time in June, up from 71.8 per cent in June 2014.

Hawaiian Airlines, which benefits from many short flights in mostly good weather, finished on top, with 90.5 per cent of its flights landing on time, followed by Alaska Airlines, Delta Air Lines and Virgin America, all three of which beat 80 per cent.

Spirit performed poorly at nearly all airports it serves but was worst in Philadelphia, Chicago's O'Hare Airport and Detroit, where on-time percentages were in the 30s. Nearly one-fourth of Spirit's flights were late at least 70 per cent of the time in June.

Spirit's on-time rating was the worst since June 2005, when Alaska Airlines posted a 49.8 per cent mark.

The overall rate of complaints against airlines jumped 45 per cent from June 2014, but Spirit alone was responsible for more than half the increase. It wasn't big enough to be included in the government reports last year.

According to the government, 284 passengers filed complaints about Spirit. That's small compared with the number of passengers about one in 5,200. But the Miramar, Florida-based company had by far the highest complaint rate of the 14 airlines covered in the report.

Spirit passengers were 43 times more likely to file a complaint than passengers on Alaska Airlines, which had the lowest complaint rate. More than half of the complaints against Spirit dealt with flight problems, with a smattering for refunds, baggage and customer service.