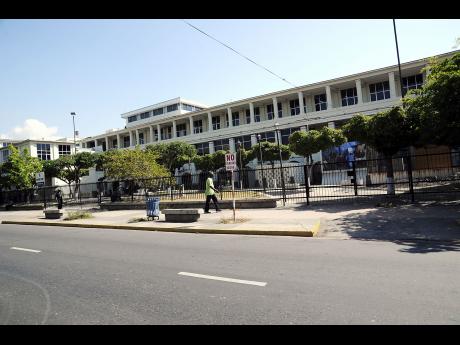 THE COURT of Appeal has given Karen Thames permission to file a lawsuit against National Irrigation Commission (NIC) for what she alleges to be wrongful termination as the state-owned company's human resources manager and acting company secretary.

NIC dismissed Thames seven years ago for failure to adhere to government guidelines, a decision she had tried to fight in the Supreme Court, but her application for judicial review of her case was turned down by Justice Evan Brown.

The appeals court, where she turned next, backed the decision made by Justice Brown to refuse the judicial review, saying it was not applicable to her case.

However, appeals judge Hilary Phillips also said the lower court should have instructed Thames to go ahead and file a claim against the NIC under its Civil Procedure Rule (CPR), which allows the court to direct that a legal claim for remedy be dealt with separately from an application for an administrative order.

Justice Phillips directed that Thames' application be dealt with as a claim and ordered the Supreme Court to schedule a case management conference at the earliest date.

Thames was first employed by the NIC as personnel assistant around February 1988 and was subsequently promoted to manager in charge of human resources and industrial relations. She was later appointed to act as director of corporate and legal services/company secretary.

However, acting on instructions from NIC board chairman Oliver Nembhard, CEO Milton Henry advised Thames a week before she was due back from leave of possible disciplinary breaches of government guidelines regarding her preparation of contracts for the NIC's development programme.

Thames was placed on interdiction with effect from August 19 and was advised that she would be informed of a date for a disciplinary hearing. In the meantime, she was asked to provide a written report on the alleged breaches by August 22.

She responded on August 18, outlining the rationale for her action in the preparation of contracts and denied knowledge of any contractual breaches. Thames also asked for the interdiction to be reconsidered.

Nearly four months later, by letter dated December 2, 2008, Nembhard informed Thames that she was being dismissed, effective December 5, 2008, for unsatisfactory workmanship or work performance as a result of the breaches.

Nembhard said NIC chose to proceed with the firing of Thames on the basis of a written report instead of an oral enquiry because Thames, in her written reply dated August 18, had not requested a hearing.

Thames' lawyer wrote to the NIC on December 11, 2008 requesting a disciplinary hearing. She also sought the intervention of the Ministry of Agriculture, which promised to investigate the matter.

Thame also applied for judicial review seeking a declaration that her termination of employment and her removal from her post were void. And, she sought an order of certiorari to quash the NIC's decision to terminate her employment, as well as damages.

In the Supreme Court, Justice Brown, while noting that the NIC was a private corporation, said it nonetheless has a public reach, and as such, its actions were subject to judicial review.

However, he found that the company's decision to dismiss Thames did not qualify for judicial review on grounds that she was not appointed to the civil service, there was no legislative underpinning of her employment, and there was no statutory restriction on the manner in which her employment may be terminated.

Justice Brown found that the relationship between Thames and the NIC was that of 'master and servant' and that judicial review was inapplicable to such a relationship.

He also ruled that there NIC's disciplinary code was only an internal guide and that its disciplinary tribunal was private, and as such, the public law remedy of certiorari could not be used to quash its decision.

In that case, he said Thames should have made a claim for breach of contract, but the judge refused to exercise his power under Rule 56.10(3) of the Civil Procedure Rules to convert the claim because he was of the view that the court would be acting in vain since all Thames would be entitled to was three months' salary in lieu of notice and she had already received that sum.

However, Justice Phillips agreed with submissions made by Thames' attorney Denise Senior-Smith that the NIC was bound to follow its disciplinary code since it had been an expressed term of Thames' contact.

She said it would appear wrong for the NIC to opt to conduct a hearing, inform Thames there would have been a hearing and then dismiss her without conducting it.

Justice Phillips said that although Justice Brown recognised that the court is empowered by the CPR, he nonetheless refused to exercise his discretion because he felt there was nothing more to litigate.

"I do not agree," Justice Phillips said.

She said Justice Brown may have well thought that by virtue of a 1909 English contract law case, damages ought to be restricted to definable pecuniary losses, that is, payment in lieu of notice and nothing more and not for injury to feelings and the harshness of the dismissal.

But that, she added, is a century-old case, and since then the law has developed.

In finding, as he did, that there was nothing more to litigate, Justice Brown was stating a conclusion on the very matter that he was being asked to adjudicate as a claim under the CPR, Justice Phillips said.

"In my view, that conclusion could only have been made by a judge after a trial of the claim and after full submissions by the parties on the material that has been placed before the court for its consideration and decision," the appeal judge said.

However, she ruled that the only remedies to which Thames would be entitled were in civil law on issues relating to whether there may have been breaches of her employment contract due to improper application of the disciplinary procedures and a breach of the implied duty of trust and confidence, which may have entitled her to additional damages.

The NIC was represented by attorney Wentworth Charles.