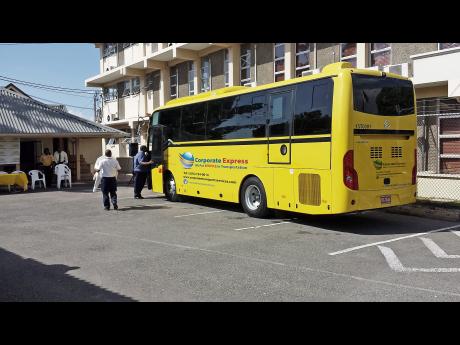 The first trip was on June 8, but last week when Wednesday Business attempted to book a seat to the Portland capital, Corporate Express staff advised that the service had stopped "about two weeks ago".

The booking was attempted after Hinds indicated that he would provide an update on the service, but did not follow through.

"The service is ok, but it is not picking up as quickly as we would want," he said at the time before cutting the conversation short. Subsequent calls have gone unanswered without access to voicemail. Messages left at Corporate Express' offices have also gone unanswered.

In a previous interview with Hinds, just ahead of the June launch, Hinds said Corporate Express was launched as the answer to requests from persons who wanted a more comfortable commute between Port Antonio and Kingston.

Termination points were the Town Square near the Old Courthouse in Port Antonio and Oakton Plaza in Half-Way Tree. There would be eight trips per day with a stop in Annotto Bay, St Mary. The one-way trips ranged up to $1,400.

The service started out with two 40-seater luxury buses leased from the JUTC. Hinds also said he would be importing four specially-equipped 37-seater buses from China to fully service the route. The total investment was projected to be $60 million by the time the units were fully commissioned, though Hinds did not say how much of that capital was going into Corporate Express' start-up.

The purchased buses were slated to arrive in August or September.

The hotelier-turned-transport boss based his foray into luxury commute on in-depth research done at the end of 2014 which, he said, showed that of the 2,500 persons surveyed as travellers of the Port Antonio-Kingston route daily, 90 per cent said the service was needed, and of that number, 98 per cent said they would use the service.

Hinds estimated a load factor of 60-65 per cent per trip, but he also said the service could survive with loads of 40 per cent.

Corporate Express joined Knutsford Express in the luxury coach market, but its entry was on a route not directly serviced by its rival.

Knutsford began servicing Port Antonio via its Ocho Rios terminal around the second quarter of this year.

Hinds later planned to add a hop from Port Antonio to Montego Bay, which would have overlapped with routes served by Knutsford Express.