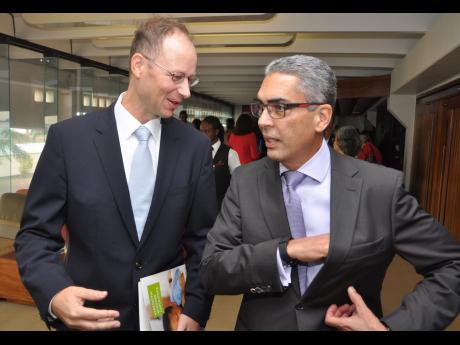 Co-chairman of the Economic Programme Oversight Committee (EPOC), Richard Byles, is of the view that the private sector has not been investing as much as expected in the economy because businesses remain uncertain about the sustainability of the reforms being undertaken by the Government.

He said some companies have been investing, "But I think there is still a kind of cloud that hangs over the private sector about being sure-footed that the reforms that are occurring in the economy are here to stay, (and) that the Government is serious and won't backtrack."

Addressing the launch of the Montego Bay Chamber of Commerce and Industry Expo 2015 at the Wexford Hotel recently, Byles suggested that the private sector match $500 million accumulated by the Government to establish a fund to create jobs.

However, president of the Private Sector Organisation of Jamaica, William Mahfood, reportedly described the proposal as unsustainable and added that that was not an option they would consider.

Responding to Mahfood and other private-sector leaders who rejected the proposition, Byles told a news conference last week: "I think there is still a bit of doubt there and that holds back and causes a lot of people to say no before they even examine and discuss what is the nature of the proposal."

Noting that he did not have an opportunity to elaborate on the proposal before, the EPOC co-chairman explained that the PetroCaribe Development Fund had approximately $500 million of Government of Jamaica securities in its investment portfolio.

Against the background of the Government's recent buy-back of the US$3.25-billion debt it owed Venezuela for oil under the PetroCaribe agreement, what he proposed was that the Government put that $500 million in a special fund.

Anyone in the private sector who has a viable project that would drive economic growth and provide jobs, but needed equity, could then approach the manager of the special fund and match their equity with some in the fund.

"In that way, I was hoping we would double the size of the fund from $500 million to $1 billion," Byles explained. "Nobody could get funding from that fund unless they were prepared and able to put up a matching amount of equity," he added.

"I'm perplexed," said Byles. "I'm in the business world and I make investments. I have made investments of more than US$220 million in the last three to four years. I keep asking myself, what am I doing? Which world am I in that others are not?" said the Sagicor Group Jamaica president and chief executive officer, questioning why others were not also investing, even if they did not invest as much as US$220 million.

Noting the apparent uncertainty about the Government's reforms as part of the economic support programme with the International Monetary Fund (IMF), Byles said, "It's just a kind of instinctive reaction. But anyway, I think that we are slowly eroding that negative attitude."

The EPOC co-chairman said he knew of no country that has dug itself out of a debt-to-gross domestic product (GDP) ratio of 145 per cent. "And I believe that despite the fact that all of these technocrats - International Monetary Fund and Jamaican - put this plan together, despite the fact that this country has performed per that plan, there is still the doubt at the back of some people's minds" who, he suggested, might be questioning whether Jamaica can "climb out of this hole" or saying that "somewhere along the line" the country is "going to slip and fall back".

Fortunately for Jamaica, he said, "A couple of events have come along and helped us, because you need every help in the world to come out of a 145 per cent debt-to-GDP."

He said that as good as Finance Minister Dr Peter Phillips has been, "I'm sure his job would have been 10 times more difficult if the price of oil had not come down and if he could not have put together that PetroCaribe deal."

Byles said those two things have changed the landscape for the economic outlook for Jamaica and given it a real shot of getting the debt-to-GDP ratio under 100 per cent, "and I think the effect of that on people's morale, investor morale is ... likely to be positive".