BOJ to auction repos, foreign exchange is next 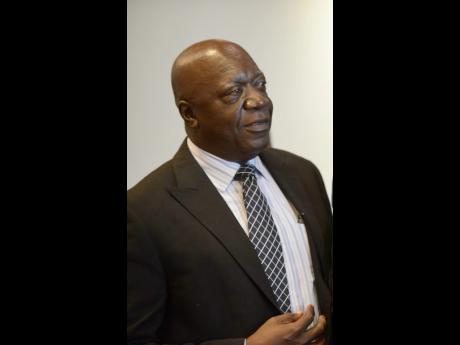 The repo operation is essentially a window for short-term loans, where Bank of Jamaica (BOJ) determines both the price and the amount to be issued to banks needing short-term funds, which add up to billions of dollars per distribution.

The auction will allow the banks to determine the price.

John Robinson, BOJ's senior deputy governor, also said Wednesday that the central bank is similarly weighing an auction system for the foreign exchange distributed to primary dealers during its US dollar market interventions.

The foreign exchange auctions will be introduced later.

The central bank offers repos of varying maturities or tenors, but the auction will start with the two-week loan.

"In the near future, BOJ plans to issue, in the first instance, repos of two-week tenor on an auction basis. In this regard, while BOJ will still determine the amount on offer, the price will be market-determined via bidding of participating DTIs," the central bank said via email.

Robinson later said the system would go live in about six weeks, which would be around the end of September to the first week of October.

"At a later date, we will consider using an auction mechanism like this [repos] whenever we intervene in the market to buy or sell [US dollars]," Robinson said.

There is, as yet, no indication from the banks on how they view the shift to the repo auction mechanism. Jamaica Bankers Association Executive Director Richard Maxwell said the group was engaged with other matters and suggested outreach to the individual banks. None of the banks, however, responded to the queries.

BOJ introduced its Enhanced Liquidity Management Framework in August 2014, through which it has issued repurchase securities - repos - ranging in tenors from overnight to six months.

Reaching out to banks

Robinson said BOJ would be reaching out to deposit-takers to explain the workings of the new system ahead of its launch.

"It's not going to be sudden. We are going to be discussing it with them so there is no disruption and everybody knows what to expect," the central banker said.

Under the current system: "What happens now is that every two weeks we offer the banks an opportunity to borrow any amount that they need to support their liquidity position. The loan is for two weeks. We have a preset rate which is related to our 30-day policy rate. It's a spread above that," said Robinson.

"They [banks] know they can borrow any amount at that rate, backed, of course, by securities," said the senior deputy governor.

The central bank's policy rate was reduced to 5.25 per cent on Monday.

This week's two-week repo rate, reduced alongside the 25 basis point cut in the policy rate, was eight per cent.

Demand on Tuesday, he said, was about $10 billion.

The commercial banks' needs vary according to what other instruments they have maturing and government operations.

"When it's a tax period, the banks lose a lot of liquidity because people are paying their taxes. There are other periods when they have payments coming to them, from BOJ as well, which means that their liquidity needs are much reduced," Robinson told the Financial Gleaner.

"It varies with currency demand also. There is a seasonal aspect and a short-term intra-month cycle."

Auctions will be held every two weeks on a Tuesday, in the same way that repurchase orders are invited currently.

As for its foreign exchange plan, the central bank is already tinkering with its intervention strategy in a way that appears to align with its market-driven focus.

The central bank's market participation - it's intervention model - typically involves BOJ supplying US dollars to primary dealers at a preset price with instructions to sell to end users at a specified price. In some instances, the central bank also buys foreign exchange.

However, since last year, from time to time, the central bank has left it up to the dealers to set their own end user price.

The auction system appears to take it a step further.

In the pre-liberalisation era, back in the 1980s, Jamaica used to auction foreign exchange.

The exchange rate was not fixed, but determined at each auction, said Robinson.

What the central bank is now contemplating "is to allow dealers to state a price at which they will sell foreign exchange to BOJ or buy funds from BOJ when bids are invited. These transactions would typically represent a small fraction of market flows but would allow the bank to buy and sell funds more competitively," he said.

The auction system takes it a step further.

The JMD repo auction is among the deliverables promised by Jamaica under its agreement with the International Monetary Fund. The issue is referenced in the June revision of the Letter of Intent.