Kingston Wharves Revenue tops $2b at half year 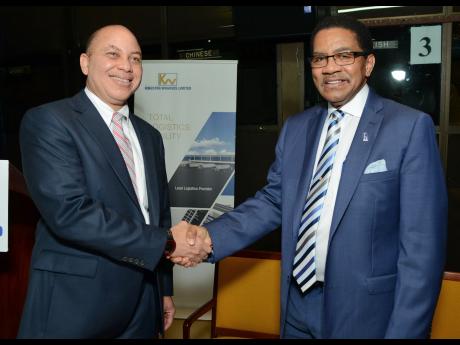 Kingston Wharves Limited (KWL) generated revenues of $2.15 billion for the six months ended June 2015, a 21 per cent or $374 million increase over the $1.78 billion recorded during the corresponding period of 2014, according to the group's financial results.

Net profit attributable to shareholders increased by $73.3 million, also 21 per cent higher than the same period the prior year, moving from $353.9 million to $427 million.

That represents earning per stock unit of 29.85 cents, comparing favourably with the 24.74 cents recorded as at June 30, 2014, said KWL Chairman Jeffrey Hall, in the directors' interim report to shareholders.

Revenues of $1.1 billion for the quarter to June reflected an increase of $210.9 million, or 23 per cent over the $927.5 million recorded during the corresponding period the previous year.

"The group continued positive performances are being realised from its strategic positioning as a regional centre for seaport, logistics and value-added services," the chairman said.

Trans-shipment container volumes handled at the KWL terminal during the six month period increased by 20 per cent over the prior year, while domestic container volumes and motor units grew by a further 22 per cent and seven per cent, respectively.

The group's results continued to be positively impacted by a focused cost management programme, which is reflected in marginal increases in operating and administrative expenses and steady gross profit margins when compared to the comparative period last year.

Administrative expenses increased from $393 million to $396.8 million. KWL recorded net profit of $431.2 million for the six months under review, compared with $355.2 million during the comparative period last year.

KWL experienced foreign exchange gains associated with the depreciation of the Jamaica dollar, but that was below the levels recorded in the prior year and resulted in a reduction in other income.

The port company said that among the notable benchmarks during the quarter was the provision of third-party logistics services to a major international player in the local tourism industry, which it did not identify.

Activities at KWL supported the management of goods in their service-supply chain and afforded scaled distribution and transfers to the company's facility, based on demand.

Group subsidiaries Security Administrators Limited and Harbour Cold Stores contributed 14 per cent of overall revenue for the sixth month period, increasing by 11 per cent from $246.5 million at the end of the corresponding period of 2014 to $273.7 million.

"During the ensuing months, we will continue to execute initiatives geared towards increasing shareholder value through the provision of logistics solutions and the strengthening of our terminal management operations," said Hall.

"The ensuing quarters will see a further concentration on our aggressive growth strategies, which we pursue with the dual goal of increasing value to our shareholders and exceeding our customers' expectations," he said, adding that "we have made significant strides in this regard".