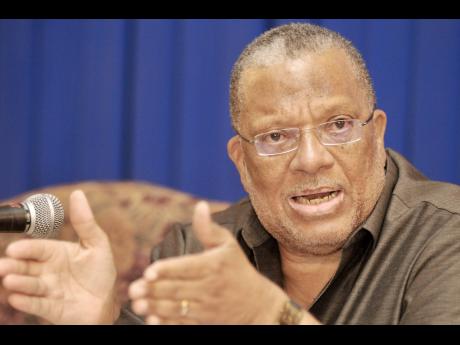 Finance and Planning Minister Dr Peter Phillips said the wage target of nine per cent of GDP by fiscal year 2016-17 is in jeopardy and will depend on the settlement reached with public-sector groups which have not yet accepted the Government's offer.

The wage target is a commitment under Jamaica's economic support programme with the International Monetary Fund (IMF).

Several unions representing public-sector workers have signed agreements with the Government for a seven per cent increase in wages for the two years ending 2016-17. However, those representing the Jamaica Constabulary Force, nurses and doctors are yet to accept the offer. Teachers signed off on a seven per cent raise over two years last week.

Asked if the nine per cent target was still possible to be reached for the 2016-17 timeline, Phillips said: "It depends, for example, on how many sign the wage agreements, the terms on which they are settled and the sequencing of the payments."

The minister, addressing a press conference at the Ministry of Finance offices at Heroes Circle in Kingston on Friday, said, "All of that will determine to what extent we meet or divert from the target."

He added that the "target was predicated on the budgeted amount" of $165.22 billion, which contemplates wage increases of four per cent for fiscal year 2015-16.

"So if nothing else is done, we are unlikely. If everyone was to sign at the rates that have been signed by those with whom we have signed, then the target is definitely in jeopardy," the minister said.

He reaffirmed the need to undertake significant public-sector reforms, saying it means that the Government "will have to look at the arrangements within the public sector with respect to our hiring of additional staff, the filling of posts, ... whether costs otherwise can be cut, whether there is an interest in voluntary separation and how can we facilitate that in areas where we can, and we are currently reviewing with the ministries ways in which we can adjust to these new realities and still meet our targets. But we are not yet at that point".

Mission chief of the IMF to Jamaica, Dr Uma Ramakrishnan, in a statement at the press conference on the conclusion of the ninth quarterly review, said the IMF welcomed the recent wage agreement between the Government of Jamaica and the Jamaica Confederation of Trade Unions.

"Improving the efficiency, quality and cost effectiveness of the public sector is critical for higher growth," she said. "Lowering the wage-to-GDP ratio to the nine per cent target for 2016-17 will create fiscal space for capital spending, which will help the Government invest in long-term priorities ... we are hopeful that the target will be met."

Phillips said Jamaica is making progress with the rest of the wage negotiations, saying "the results so far indicate a positive shift in attitudes" by the unions towards reaching an agreement.

In what has become the finance minister's regular refrain, he said Jamaica must live within its means.

"If the amount budgeted for the negotiations are not sufficient to reach settlement, then we will have to find resources from elsewhere in the Budget," Phillips said.

"There are no new resources," he asserted. "While the nego-tiations are still ongoing, it is already clear that we will need to undertake cost rationalisations in addition to achieving greater levels of efficiency within the public sector as a whole."