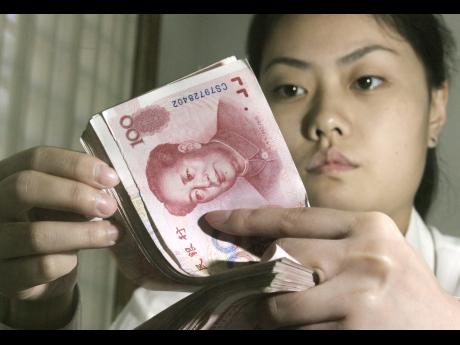 AP
In this August 7, 2003 file photo, a Chinese bank worker displays Chinese yuan at a bank in Beijing.

In emerging markets worldwide, currencies are plunging over fears that developing economies are on the verge of a crippling fall.

Success stories until recently, emerging economies are seen as casualties now of slower growth in China, plunging prices for commodities like oil and iron ore, the prospect of higher US interest rates and home-grown threats.

The damage has spilled across oceans, with the turmoil jolting investors in New York, Tokyo and Europe. Investors there worry that China and other major emerging economies will reduce their imports. They also fear a trade-disrupting currency war as some countries desperately lower their currencies' value to gain a competitive edge.

A lower-priced currency makes a country's goods cheaper for foreigners.

Even so, the trouble in emerging markets is a surprising and unsettling reversal.

"It's remarkable just how things turned around so quickly," says Neil Shearing, an economist at Capital Economics and a former British Treasury official.

Consider Peru. Three years ago, its capital, Lima, was chosen to host an International Monetary Fund's meeting of global finance officials in what was seen as a celebration of Latin America's arrival in the economic big leagues.

But with the event six weeks away, Latin America's outlook has descended from boom to gloom. Peru's economy has steadily slowed, and its currency, the nuevo sol, has plunged 2.5 per cent against the US dollar in the past month.

And Peru boasts one of the region's healthiest economies. Brazil's economy is expected to shrink this year and next. Its currency, the real, is down seven per cent the past month and more than 30 per cent the past two years. The Mexican peso closed Friday at a record low against the dollar.

It's hardly just Latin America. Kazakhstan's currency plummeted this week after the government decided to let it trade freely. The South African rand fell this week to a 14-year-low against the US dollar. Turkey's lira hit a record low against the dollar this week.

Hung Tran, an executive managing director at the Institute of International Finance, expects developing countries to post 3.8 per cent economic growth this year, down from 4.3 per cent in 2014. The institute is on the verge of cutting that forecast further.

Analysts point to a primary culprit.

"It's all coming from China," says Masamichi Adachi, an economist with JP Morgan Chase in Tokyo. "Brazil, South Africa, many countries are commodity exporters, and the final destination is all going to China."

The Chinese economy is slowing more sharply than most people had expected from the double-digit growth rates of the mid-2000s. The world's second-biggest economy is expected to grow seven per cent this year, which would be its slowest pace since 1990.

Beijing is trying to manage a transition from rapid growth based on exports and often-wasteful spending on factories, real estate and infrastructure to slower, steadier expansion based on consumer spending.

Emerging markets were already feeling the squeeze last week, when China devalued its currency, the yuan. That step ignited a semi-panic.

"The devaluation is a red flag about China's current economic situation," says Kurt Braybrook, who runs a Shanghai company that does quality control work. A falling yuan raises the risk that other countries will devalue their currencies to catch up.

Most countries can't blame China and the vagaries of the global commodities market for all their problems.

South Africa is battling labour strife. Brazil is contending with a corruption scandal at state-owned oil giant Petrobras. Turkey is struggling to form a government while its military battles the Islamic State extremist group and Kurdish separatists.

Adding to the pressure: America's Federal Reserve is expected, perhaps at its September meeting, to raise the short-term rate it controls from near zero. Investors could respond by moving even more money out of emerging markets to seek higher US rates. That would lift the dollar higher and emerging market currencies even lower.

A Fed rate hike could also squeeze emerging market companies that have borrowed in US dollars. Those companies would struggle to accumulate enough local currency to pay their now-more-expensive dollar-denominated debt.

Tran at the Institute for International Finance says dollar borrowing by emerging market companies surged from US$700 billion in 2010 to US$2 trillion through March.

The rising dollar and the hoard of dollar loans recall the 1997-1998 Asian financial crisis. Back then, a currency sell-off triggered an emerging market debt crisis that became a disaster for countries such as Indonesia and South Korea.

But the picture is less alarming now, analysts say. For one thing, developing countries have stockpiled foreign reserves that they can use to buy their own currencies and stop a crisis.

What's more, emerging market companies that borrowed in dollars in recent years tended to take out longer-term loans, notes Joaquin Cottani, Standard & Poor's chief economist for Latin America. During the 1997-98 crisis, companies had taken out short-term loans and couldn't refinance when the loans came due during a panic.

"Countries have learned from their experiences," says Monica de Bolle, visiting fellow at the Peterson Institute for International Economics.