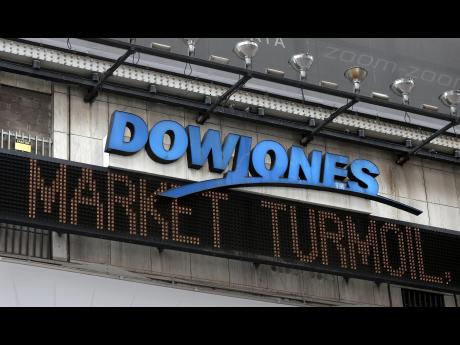 AP
An electronic display shows information about the stock market in Times Square, New York, on Monday when the Dow shed 1,089 points before recovering some of the lost ground.

Don't do anything rash. Amid the scary slide on Wall Street, that's the advice from the professionals to ordinary investors.

At times when the stock market's movements are almost nauseating, they say the best course of action is: Sit tight. Even the most capable financial professionals, managing billions of dollars in assets, say they don't know where this market is heading and are staying put themselves.

"If you lived through the 2008, early-2009 debacle, which was horrible, you know that it can recover in a relatively short period of time," said John Power, a financial planner at Power Plans in Walpole, Massachusetts.

A case in point: If you sold on Monday when the Dow Jones fell 588 points, you would have locked in your losses and missed Tuesday's modest recovery.

Stocks surged Tuesday afternoon on Wall Street, erasing some of the heavy losses of a day earlier, after China cut interest rates to try to boost the world's second-largest economy.

Traders around the world welcomed the move, which came after days-long global sell-off triggered by fears of a slowdown in China.

"They're relieved by what China has done," said Chris Gaffney, president of EverBank WorldMarkets, and are telling themselves: "Maybe it's time to get back in there."

Investors also got some encouraging news from a survey indicating that US consumer confidence rebounded this month. A separate report showed sales of new US homes bounced back in July.

The Dow shed gains later in the day to close down by 205 points.

Financial advisers emphasise that volatility is something investors need to get used to again. After a seven-year bull market, they have become complacent.

The stock market as of Monday entered into what's known as a correction, or a drop of at least 10 per cent from a recent high. But stock market corrections historically come every 18 months or so, and the last one in the United States was in 2011. So we were due for one.

It may be tempting to make drastic changes to your 401(k). But retirement investment plans are designed to build a return over several years, if not decades. So even in the aftermath of the worst weekly slump since 2011, dumping stocks now or pulling back on contributions to your plan is likely to hurt your prospects for higher retirement income in the long run, financial advisers say.

"Avoid making knee-jerk emotional reactions," said David Shotwell, a certified financial planner at Rutter Baer in Lansing, Michigan. "That volatility that we face now is the price we pay to have better returns over time. And the ones that lose are the ones that get out at the wrong time, when things are low."

For investors looking to retire within the next two or three years, resist the temptation to sell all your stocks in favour of bonds.

Those investors who feel the need to do something, it might be worthwhile to revisit the basics: Do you have the right mix of investments for your age? Are you appropriately diversified among small and large companies, US and international, dividend-paying and growth?

Moving to cash can feel good, but remember cash doesn't earn anything. If the market falls some more, yes, you're protected if you've cashed out some of your stocks. But if this correction comes and goes, which it will, you'll miss out on those stock market gains.

History is a guide. Take the 2008 financial crisis and the ensuing stock market plunge in the first three months of 2009.