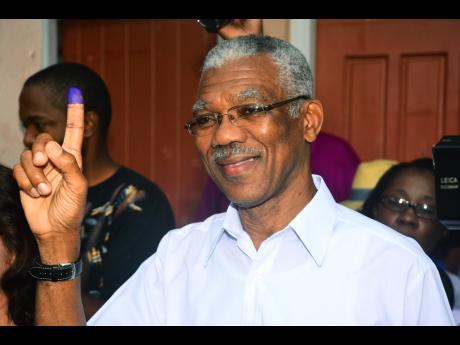 Guyanese manufacturers have urged the government to re-examine its decision to pay millions of dollars to a Surinamese company in keeping with a ruling by the Caribbean Court of Justice (CCJ), but the Granger administration has immediately rejected the suggestion, saying it is not a rogue state.

The Guyana Manufacturing and Services Association (GMSA) had expressed dissatisfaction with an order by regional court CCJ - which adjudicates trade disputes among CARICOM members - to reimburse taxes of US$6 million to Rudisa Beverages, a rival to local drink companies.

Rudisa had contested Guyana's Environmental Tax (E-Tax) levied against the importation of disposable bottles, saying it was discriminatory and goes against the Treaty of Chaguaramus. The court ruled in its favour.

In response to the GSMA, junior government minister Joseph Harmon said the Granger administration would not abandon its decision to repay the beverage company.

"Well, the court has decided [and] we are not a rogue state," said Harmon, who added that Guyana would abide by the law.

Harmon argued that the CCJ had made a ruling and Guyana would abide by that law.

"The highest court in the land - the Caribbean Court of Justice has made a ruling, what they expect us to do now? Go and disregard it? This is the nonsense that got us into this same problem. What they want us to do now? Revisit a court decision?"

Last month, the CCJ expressed its satisfaction with the progress made by Guyana to settle a court ruling handed down in May 2014 regarding the imposition of an environment tax on the beverage company that the court pronounced illegal.

The CCJ had ordered Guyana to repay the sum of US$6.04 million together with any further tax paid by Rudisa Beverages and Juices N.V. and Caribbean International Distributors Inc (CIDI) from October 25, 2013 to the date of the judgment, with interest at four per cent per year.

Guyana was also ordered to "cease forthwith" the collection of the tax and to take necessary action to ensure that collection would not continue.

But in a statement, the GMSA said that it wanted to "place in the public domain our strong recommendation for a re-examination of the decision by Government to accede to the demands by the Surinamese company, Rudisa Beverages for a refund" of the E-Tax.

"As the official business representative of private-sector manufacturers in Guyana, the GMSA is appealing to the administration to re-examine the ruling by the CCJ ... . In addition, Government must take into account the gross unfairness to Guyanese who would be forced to pay twice since they already pay Rudisa's Environmental tax with every purchase of a Thrill drink," the GSMA said.

The group said it had viewed the entire video recording of the court proceedings and was of the view that the onward transmission of the E-Tax to Guyanese retailers and consumers merits a serious review by the Guyana Revenue Authority, saying it was " highly probable" that Rudisa could end up owing the people of Guyana.

"We ask the authorities to consider the full implications of the CCJ's ruling against Guyana. No one could ignore the fact that the beverage industry is a very competitive one in the domestic market," said GSMA.

"Guyana boasts of several large-scale beverage manufacturers who market in direct competition with every imported beverage. These local companies were also caught in the E-tax net, which placed an even greater strain on their operational costs and revenue sales. They do not pass on the E-tax to consumers."

The GMSA said it was appealing for fairness and equity, while noting that members of its group face "a slew of illegal non-tariff barriers" in countries in and outside of the Caribbean.

"We can only expect fairness and support at home," the manufacturers said.