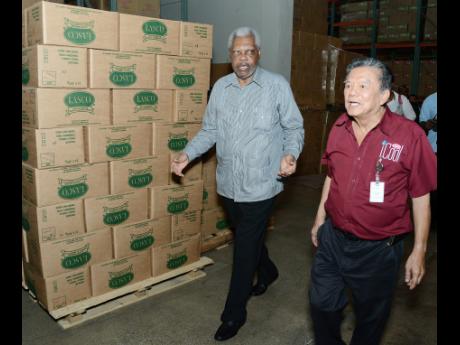 Lasco Manufacturing Limited is to upgrade its capacity by next January to meet increasing demand for its iCool beverage line, Chairman Lascelles Chin has said.

The company is adding a new filling line in the continuation of its expansion programme that kicked off three years ago.

"We are adding another equipment that will quadruple our production because we can't keep up," said Chin.

"We are doing several hundred cases a month now, but we are going to double that," the Lasco chairman said during a tour of the company's liquid and powder plants at White Marl in St Catherine by Prime Minister Portia Simpson Miller on Tuesday.

The iCool beverage line was launched in 2014. It began with water; cranberry and cran-strawberry-flavoured water; and fruit punch and tangerine juice drink. Two new juice drink flavours, melon-berry and passion fruit, were added recently. There has been been some negative feedback from what is criticised as an overly sexualised promotion of the melon drink.

The Lasco companies have been in expansion mode with massive upgrades to the manufacturing and distribution arms.

Chin said the new equipment to be installed is part of the US$50-million investment programme for Lasco Manufacturing that began in 2012 with the addition of the liquid plant. The new plant was completed two years later in 2014 for US$25 million, a project that expanded factory space at the White Marl manufacturing base to 340,000 square feet.

Before the project, Lasco Manufacturing's fixed assets were valued at $1 billion. That value has now risen to $3.54 billion.

Affiliated company and distribution agent Lasco Distribution Limited is also expanding its complex at a cost of $1.2 billion to accommodate business generated both from inside and outside the Lasco family.

Lasco Manufacturing continued to report improved profits - the June quarter returned $247 million net profit, which was 75 per cent better than the 2014 quarter - bolstered by expanded capacity and due to the performance of the iCool line. The liquid plant was commissioned after the June 2014 quarter.

Chin said production capacity at the liquid plant has already been doubled since its commissioning - new capacity was added during the June 2015 quarter - and that the new equipment to be installed by January would allow for production of even higher volumes.

For its non-beverage output, a new dry plant to package powdered products is now in place.

The company also plans to add new products on both the liquid and powdered lines.

Currently, iCool is made from imported juice blends but "in the future we will look to see what we can get locally," the Lasco chairman, even while bemoaning the unavailability of mass quantities of local fruit flavours.

"The problem is that when you do a big volume, to get the volumes constantly is a problem, but we are going to see what can be done," he said.