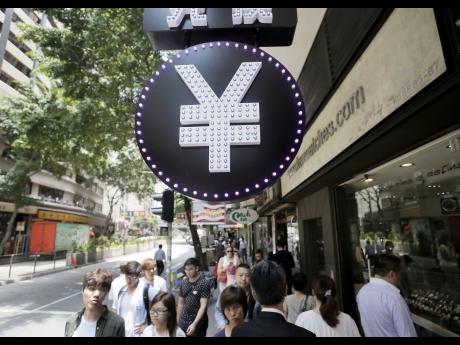 AP
A Chinese yuan sign is seen at a currency exchange shop in Hong Kong, August 11, 2015.

China's foreign-exchange reserves fell by a record US$93.9 billion in August as the central bank spent heavily to support its currency's exchange rate following a surprise devaluation.

Reserves declined to US$3.557 trillion as of the end of August, according to the People's Bank of China. They remain by far the world's largest, despite August's fall.

Currency traders bet the yuan would fall further after the August 11 devaluation that rattled global financial markets, putting downward pressure on the exchange rate and prompting the central bank to buy the currency to support its value.

The central bank said the devaluation was part of efforts to make the yuan's state-set exchange rate more market-oriented. But the change, coming at a time of weakening Chinese economic growth, prompted suggestions it was trying to give struggling exporters a price advantage.

Analysts said the devaluation was too small to make a difference in trade but it fuelled concerns of a possible "currency war" if other governments responded by weakening their own exchange rates.

"China will be facing a difficult situation, where efforts to support the yuan may be increasingly untenable," said Bernard Aw of IG Markets in a report.

Beijing amassed its foreign-exchange reserves over the past two decades through buying currency to prevent the yuan from rising too fast against the US dollar and hurting Chinese exporters.

At a meeting of Group of 20 finance officials last weekend, People's Bank Governor Zhou Xiaochuan said the yuan had reached a stable exchange rate against the dollar, according to a central bank statement.