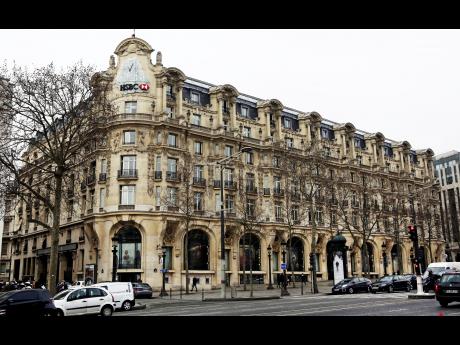 The HSBC France headquarters on the Champs Élysées in Paris.

Caribbean central banks are seeking to have the International Monetary Fund (IMF) engage in discussions with foreign financial institutions with a view to avert any economic fallout from regional banks' loss of correspondent banking relationships.

The potential loss of those relationships was among the major issues discussed at last week's Caribbean growth forum in St Kitts, and agreement was reached that, among other things, the IMF, along with other bodies, should use its position to seek resolutions that support the region's objectives, Bank of Jamaica Governor Brian Wynter told Wednesday Business.

According to IMF economist Jacques Bouhga-Hagbe, the potential loss of vital correspondent banking relationships has emerged as a major risk for all Caribbean banks. Moreover, he said the loss could be disruptive to the banks and to economic activity in the region.

In an article in the September 2015 IMF newsletter Caribbean Corner, Bouhga-Hagbe noted that a number of major banks have recently either terminated their correspondent banking relationships with many banks in the Caribbean, or have threatened to discontinue them.

In global banks' communications to affected banks, the reasons for the termination of the relationships may not be fully articulated, making it particularly difficult for affected banks to seek replacement correspondents, he said.

However, he said "it is believed that this phenomenon is emerging as an unintended consequence of several factors, including the enforcement of stricter global regulatory standards such as on anti-money laundering/combating the financing of terrorism and prudential regulations."

As a result, some customers, business lines, markets and jurisdictions are evidently being perceived as too risky and costly in terms of compliance, and are, therefore, being cut off by global banks.

While Bouhga-Hagbe did not identify them, he said that already at least 10 banks in the region - including two central banks - in five countries have, as of June 2015, lost all or some of their correspondent banking relationships.

In at least one country, local banks that have already lost major correspondent banking relationships are of systemic proportions, with assets amounting to more than half of the domestic banking system's total assets or about 50 per cent of gross domestic product.

In other Caribbean countries, the affected banks so far are either not systemic or have other ongoing correspondent banking relationships, the IMF economist said.

Outside the Caribbean, there is evidence that similar "de-risking" is also taking place in regions such as the Middle East and North Africa.

All international transactions conducted through the affected banks are potentially affected, he said.

These include the processing of financial instruments - cash, cheques, money orders, wire transfers, credit and debit cards, and letters of credit - that are critical for key international transactions such as remittances, tourism, trade and foreign direct investment.

Bouhga-Hagbe said the impact of the loss of correspondent banking relationships in the Caribbean has been contained so far, partly because of measures taken by Caribbean authorities.

In countries where concerns were the greatest in early 2015, new arrangements that have been put in place with the support of central banks and major credit card companies seem to be working as international financial transactions have not been disrupted as initially feared.

Bouhga-Hagbe said IMF staff is already engaging national and international partners - including the Federal Reserve, the World Bank, the Financial Action Task Force, the Financial Stability Board, and the Arab Monetary Fund - to encourage a proportionate application of international standards on anti-money laundering and combating the financing of terrorism and to raise awareness on related spillovers to other countries.

An IMF staff discussion note is expected to be issued in 2016, including policies that countries could implement to reduce the likelihood of losing correspondent banking relationships.

There have been no reports of Jamaican banks losing their correspondent banking relationships so far.

However, National Commercial Bank, in 2013, and RBC Royal Bank, in 2011, took the decision not to continue accommodating wire transfers and other foreign-currency transactions with cambios.

NCB said then that its decision was taken in light of "globally recognised exposure to money laundering and terrorist-financing risks associated with these businesses".

Regulations aimed at tighter controls of those activities also affected Jamaica's money-services businesses, which, in turn, affected the flow of remittances, especially from the United States and the United Kingdom.

Boosting economic activity to achieve growth by undertaking a series of reforms is essentially the objective of the Jamaican Government's four-year programme with the IMF.